The 1972 NHL Expansion Draft was held on June 6, 1972. The draft took place to fill the rosters of the league's two expansion teams for the 1972–73 season, the New York Islanders and the Atlanta Flames.

Billy Smith became the only player selected in the expansion draft by the Islanders to help them win the Stanley Cup in 1980. Smith would help the Isles win the Cup in each of the following three seasons. 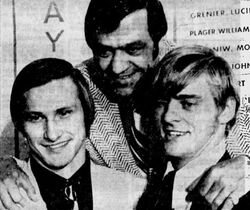