The 1972 Memorial Cup occurred May 8-May 14 at the Ottawa Civic Centre in Ottawa, Ontario. Participating teams were the winners of the Ontario Hockey Association, Quebec Major Junior Hockey League and Western Hockey League which were the Peterborough Petes, Cornwall Royals and Edmonton Oil Kings. Cornwall won their 1st Memorial Cup, defeating Peterborough in the final game. 1972 was the first year the Memorial Cup was contested as a round robin tournament between three teams.

Champion Cornwall Royals
Add a photo to this gallery 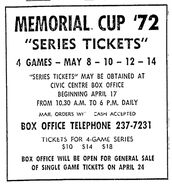 Retrieved from "https://icehockey.fandom.com/wiki/1972_Memorial_Cup?oldid=614634"
Community content is available under CC-BY-SA unless otherwise noted.