The Centennial Cup 1972 is the Tier II Junior "A" 1972 ice hockey National Championship for the Canadian Junior A Hockey League.

The finals were hosted by the Guelph CMC's in the city of Guelph, Ontario.

Guelph CMC's forward Paul Fendley died days after game four of the championship series after hitting his head on the ice during game four. He was the CMC's leading scorer. 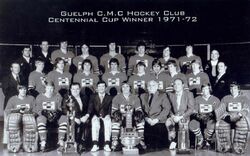 Guelph CMC's
Add a photo to this gallery

Retrieved from "https://icehockey.fandom.com/wiki/1972_Centennial_Cup?oldid=413368"
Community content is available under CC-BY-SA unless otherwise noted.