The 1972–73 QMJHL season was the 4th season in the history of the Quebec Major Junior Hockey League. The summer of 1972 saw the departure of the Saint Jerome Alouettes and the Verdun Maple Leafs from the league, reducing the circuit to eight teams. In an off-season lawsuit between the QMJHL and the OHA, the QMJHL gained a team, when the Montreal Junior Canadiens transferred leagues.

The Michel Brière Memorial Trophy was first awarded to the league's most valuable player in honour of Michel Brière, who was killed in a car accident. Nine teams played 64 games each in the schedule. The Quebec Remparts finished first place in the regular season, and won the President's Cup, defeating the Cornwall Royals in the finals.

Andre Savard was the leading scorer of the playoffs with 42 points (18 goals, 24 assists).

Quebec Remparts
Add a photo to this gallery 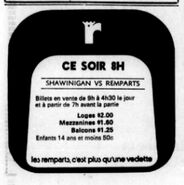 Retrieved from "https://icehockey.fandom.com/wiki/1972%E2%80%9373_QMJHL_season?oldid=408179"
Community content is available under CC-BY-SA unless otherwise noted.