The 1972–73 Ottawa Nationals season was the 1st season of the Nationals franchise in the World Hockey Association (WHA). The Nationals finished 4th in the Eastern Division and lost in the Quarter-finals to the New England Whalers 4 games to 1.

The Nationals were originally owned by Doug Michel, who rumoured he would place the team in either Hamilton or Toronto, however, he placed the club in Ottawa. After the team was placed to play in Ottawa, Nick Trbovich became the majority owner, with Michel running hockey operations. The club was placed in the six team Eastern Division, with the top four clubs earning a playoff berth.

In June 1972, the team signed its first players, Rich Leduc and Ron Climie.

The Nationals jersey colours for their only WHA season were red, white and blue with a primarily white home jersey and a primarily red away jersey. Jersey numbers were outlined with the names were not. Shoulders yolks with three stripes underneath the front and back and three stripes on the arms and body completed the design. The logo was a rounded rectangle containing the letters "ON" with a maple leaf inside the "O". Both jerseys had the player's names on the back with no nameplate.

The Nationals held their training camp in Hull, Quebec. NHL players the team had signed couldn't attend camp until October 1, 1972, the day their NHL contracts expired. The team held its first exhibition game on October 1 and lost 3-1 to the Philadelphia Blazers. The Nationals lost all five of their exhibition games.

The first game in the WHA was a match between the Nationals and the Alberta Oilers at the Civic Centre, with Alberta winning the game 7-4 on October 11, 1972. Ottawa recorded their first victory in their fourth game, a 6-2 decision over the Chicago Cougars. The Nationals would eventually find themselves a season high two games over .500 with a 12-10-1 record before falling into a long slump, in which the club had a record of 7-21-3 in their next 31 games and see themselves in last place in the Eastern Division. Ottawa would play very good hockey down the stretch, and finish the season at 35-39-4, earning 74 points and the fourth and final playoff position.

Attendance was an issue for the club though, as they drew an average of just over 3,000 fans per game, as the team was competing against the very popular Ottawa 67's OHA team for fans.

Offensively, Ottawa was led by Carleton, who scored a team high 42 goals and 49 assists for 91 points, which ranked him tenth in league scoring. Twenty year old Gavin Kirk had a very good season, earning 68 points in 78 games, while Bob Charlebois earned 64 points. On the blueline, Brian Gibbons had 42 points to lead the way, while Rick Cunningham had 41 points, and a team high 121 penalty minutes.

In goal, Gilles Gratton had the majority of playing time, winning a team high 25 games and posting a 3.71 GAA. Les Binkley backed him up, earning 10 wins and a GAA of 3.72.

The Nationals would play the season in Ottawa, but transferred their playoff games to Toronto. Due to low attendance in Ottawa, an arena lease dispute and much better attendance in their two playoff games in Toronto, where they averaged over 5000 fans per game, the Nationals would relocate to Toronto permanently beginning in the 1973-74, and the club would be renamed the Toronto Toros.

The Nationals would open the playoffs with a best of seven series against the New England Whalers, who had a league high 94 points. The series opened up with two games in New England, and the Whalers took advantage of their home ice, defeating Ottawa 6-3 and 4-3 to take a two game series lead. The series moved to Maple Leaf Gardens in Toronto, as the Nationals ownership decided to move their playoff games from Ottawa due to attendance problems. The Nationals used their "home ice" advantage in the third game, defeating the Whalers 4-2 to get back into the series, however, New England easily defeated Ottawa in the fourth game 7-3 to take a 3-1 series lead. The Whalers would close out the series in the fifth game back in New England, as they beat Ottawa 5-4 in overtime to eliminate the Nationals. 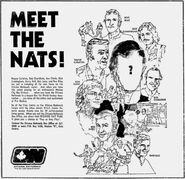 Quarter Final @ Toronto
Add a photo to this gallery

Retrieved from "https://icehockey.fandom.com/wiki/1972–73_Ottawa_Nationals_season?oldid=720793"
Community content is available under CC-BY-SA unless otherwise noted.