The Centennial Cup 1971 is the Tier II Junior "A" 1971 ice hockey National Championship for the Canadian Junior A Hockey League.

The Manitoba Centennial Trophy was presented to the Canadian Amateur Hockey Association (CAHA) by the Manitoba Amateur Hockey Association to commemorate their centennial year of 1970. It was in that year that the CAHA reconfigured their junior tier, creating two separate classifications - Major Junior and Junior "A." The Major Junior class encompassed the teams that made up the "Canadian Major Junior Hockey League" while the Junior "A" section included the remaining junior teams within the association. With the Memorial Cup established as a trophy exclusively for teams in the "Canadian Major Junior Hockey League", al Trophy served as the trophy for the champions of this new Junior "A" division.

The cup final was supposed to be played in Red Deer but fire regulations precluded capacity crowds in the local arena. On short notice the final was arranged in Charlottetown.

The Red Deer Rustlers of the Alberta Junior Hockey League defeated the Charlottetown Islanders in 1971 to claim the inaugural Canadian Junior A Championship and Manitoba Centennial Trophy, often referred to as the "Centennial Cup." 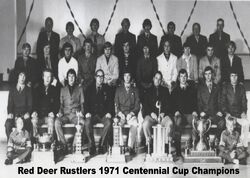 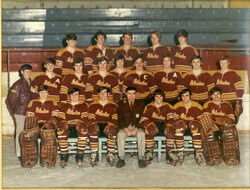 Charlottetown Islanders
Add a photo to this gallery

Retrieved from "https://icehockey.fandom.com/wiki/1971_Centennial_Cup?oldid=408500"
Community content is available under CC-BY-SA unless otherwise noted.