The 1970–71 Vancouver Canucks season was the franchise's 1st in the NHL. The Canucks finished 6th in the East Division and did not qualify for the playoffs.

The Canucks joined the league on May 22, 1970, along with the Buffalo Sabres. After not being awarded an expansion team in 1967 when the league added six teams, Vancouver finally joined the NHL in 1970 for a price of $6 million (compared to $2 million in 1967[1]). The Vancouver Canucks of the Western Hockey League were promoted to the NHL, though the ownership group of the WHL Canucks, not willing to pay the $6 million to join the NHL, sold the team to Medicor, a group controlled by Thomas Scallen.[2]

The Canucks logo was a stylized C designed as a hockey stick inside a rink incorporating the colours of blue, green and white to represent the water, forests and snow surrounding Vancouver.[3] It was designed by a local creative designer, Joe Borovich, and bought for $500.[4]

During the Amateur draft, held on June 11 in Montreal, there was debate over what expansion team would draft first. In order to reach a compromise, a numbered spinning wheel was brought in to determine the draft: the Sabres were odd numbers, the Canucks even. When the wheel landed on 11, the Canucks and NHL President Clarence Campbell thought it was II (two) in Roman numerals. However it turned out to be 11 (eleven) in Arabic numerals, leading the Sabres to select first overall future superstar Gilbert Perreault.[2]

On October 9, 1970, the Canucks played their first game in the NHL, a 3-1 loss to the Los Angeles Kings. There was a grand opening ceremony attended by British Columbia Premier W. A. C. Bennett, Mayor of Vancouver Tom Campbell (who was booed by fans), Chief Dan George[3] and former Vancouver Millionaires player Cyclone Taylor, who received a standing ovation upon being introduced.[2] Barry Wilkins scored the first goal for the Canucks in the third period.[2]

Throughout the first three months of the season, the Canucks managed to stay within contention of a playoff spot, despite playing in the much stronger NHL East Division, composed of five of the Original Six teams (Chicago was transferred to the West Division at the start of the season). This changed when captain Orland Kurtenbach injured his knee in late December. The Canucks would finish their inaugural season with six 20 goal scorers, and Tallon would break Bobby Orr's rookie record for defenceman assists,[3] but still only one point out of last in the East Division.[2]

†Denotes player spent time with another team before joining Vancouver. Stats reflect time with the Canucks only.

*Denotes player traded by Vancouver midway through the season. Stats reflect time with Canucks only.

Records Achieved in the SeasonEdit

The Canucks were involved in the following transactions during the 1970-71 season.[5]

Vancouver's picks at the 1970 NHL Expansion Draft. In order to fill out the rosters of both the Canucks and Buffalo Sabres, they were given the opportunity to select eighteen skaters and two goaltenders from the unprotected lists of existing NHL team's rosters.[3] Teams were allowed to protect several players from being drafted, and as such kept many of their star players, leaving the Canucks and Sabres with lesser quality players to choose from. The draft was held on June 9, 1970, at the Queen Elizabeth Hotel in Montreal, Quebec, Canada. Using a spinning wheel to determine the order of the expansion draft, Buffalo had the first choice.[3] 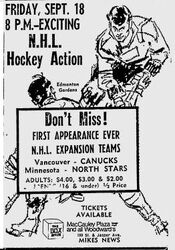 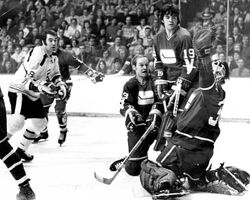 Ed Westfall scores on Dunc Wilson, February 25, 1971.
Add a photo to this gallery

The Bruins set the record for the fastest three goals, scored in 20 seconds versus the Vancouver Canucks, February 25, 1971.

Film of the Sabres inaugural season including the 1970 NHL Expansion Draft and 1970 NHL Amateur Draft and many interviews. Footage of the Sabres first exhibition game (against the Rangers), a game versus Montreal, Toronto on November 18, 1970 (featuring Leafs goalie Murray McLachlan in one of his two NHL games), Detroit on February 20, 1971, Boston on February 23, Chicago on March 5, St. Louis on March 18 (Gilbert Perreault breaks the record for most goals by a rookie), Vancouver on March 26, 1971.

Retrieved from "https://icehockey.fandom.com/wiki/1970%E2%80%9371_Vancouver_Canucks_season?oldid=693361"
Community content is available under CC-BY-SA unless otherwise noted.