The 1970–71 St. Louis Blues season was the St. Louis Blues' 4th season in the National Hockey League (NHL). The Blues finished 2nd in the West Division and lost in the Quarter-finals to the Minnesota North Stars 4 games to 2.

The Blues began the 1970–71 season with high hopes after making a trip to the Stanley Cup Final in the 1969–70 season. They purchased Christian Bordeleau from the Montreal Canadiens, who led the team in scoring and finished in the top five in game winning goals[3] that season. They also sold Hockey Hall of Famer Jacques Plante to the Toronto Maple Leafs.[4]

Barclay Plager suffered a broken nose during and played with a goalie mask for part of the season. 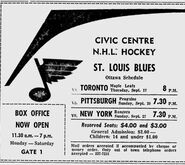 Film of the Sabres inaugural season including the 1970 NHL Expansion Draft and 1970 NHL Amateur Draft and many interviews. Footage of the Sabres first exhibition game (against the Rangers), a game versus Montreal, Toronto on November 18, 1970 (featuring Leafs goalie Murray McLachlan in one of his two NHL games), Detroit on February 20, 1971, Boston on February 23, Chicago on March 5, St. Louis on March 18 (Gilbert Perreault breaks the record for most goals by a rookie), Vancouver on March 26, 1971.