The 1970–71 Montreal Canadiens season was the club's 62nd season. The Canadiens finished 3rd in the East Division and defeated the Chicago Black Hawks in the 1971 Stanley Cup Finals 4 games to 3 to win their 17th Stanley Cup.

The first meeting of the season between the Boston Bruins and the Canadiens on November 8 saw plenty of rough play. Eleven penalties were called in the first 19 minutes of the first period. With the Bruins leading 3-1, a wild melee broke out in the last minute that turned into a bench-clearing brawl. With multiple fights going on, Derek Sanderson and Claude Larose got into it on the Canadiens bench. Fans got involved in the fight which the police rushed to stop. Incensed, more Montreal players waded into the crowd, throwing punches. Police restored order and amazingly, no misconduct penalties were assessed. Each team received three fighting majors and in the penalty-free second period, Dallas Smith made it 4-1 Bruins, resulting in Rogatien Vachon being pulled. Boston added two more in the third period for a 6-1 drubbing in which Bobby Orr and Phil Esposito both had three points.

On December 5, the Bruins played in Montreal. The Canadiens were in disarray, having fired coach Claude Ruel in response to John Ferguson and Ralph Backstrom complaining about Ruel's leadership and retiring. Al MacNeil was behind the bench, Ferguson and Backstrom were coaxed out of retirement but the Canadiens were missing Jean Béliveau, Yvan Cournoyer and Jacques Laperriere for the game. The Bruins took advantage early, with Wayne Cashman scoring on a goal mouth scramble from a Phil Esposito shot. The Habs tied it up at 13:30 but Derek Sanderson restored the lead 14 seconds later. Esposito scored the eventual game winner late in the second period. Nursing a thigh injury, Bobby Orr didn't play in the third period but excellent team defense and a Ken Hodge empty-netter, assisted by Esposito, saw the Bruins win 4-2.

Before the January 24 game versus Boston, "Ted Green Night" was celebrated. With Green's family present, including his three young children, he was showered with gifts and tributes including a new car, an addition to his home and a plaque from Canadiens captain Jean Béliveau. Green spoke and was extremely emotional, thankful for being able to return from the horrific skull injury inflicted upon him in the 1969-70 pre-season. Fittingly, the Bruins defeated the Habs 4-2.

The Bruins and Canadiens faced each other in the playoffs for the fifteenth time, having last met in the 1969 Semi-finals where Montreal won in six games. Having shattered nearly ever team record in the regular season, the Bruins were heavy favorites to take the series. A comeback from a four goal deficit in Game 2 led by Jean Béliveau and outstanding goaltending by rookie Ken Dryden in several games resulted in Montreal upsetting Boston four games to three.

Game 1 at the Boston Garden saw Gerry Cheevers start in goal for the Bruins and Ken Dryden for the Canadiens. Boston soundly beat Montreal 7-2 in the last game of the regular season with Phil Myre in net so the Habs turned to Dryden, despite him only having played six NHL games. The game was a goaltenders duel which Cheevers won, stopping 30 shots to Dryden's 39. Bobby Orr opened the scoring with a precise slapshot from the point at 3:57 of the first period on the power play. Montreal responded with a power play goal of their own by John Ferguson early in the second period. Wayne Cashman scored the game winner near the halfway point of the period before Fred Stanfield added an insurance goal at 8:47 of the third period as the Bruins won 3-1.


Game 2 at Boston saw Bruins coach Tom Johnson start Eddie Johnston in net. Given Cheevers' excellent performance in Game 1, many questioned the move, especially after Montreal executed one of the largest comebacks in NHL playoff history. After Yvan Cournoyer scored at 3:32 of the first period, Bobby Orr tied it up a minute later with a one-timer slapshot from the slot. Ted Green made it 2-1 Bruins in the next minute on a give and go with Ken Hodge. In the second period, Boston broke the game open with goals by John McKenzie, Wayne Cashman and Derek Sanderson, all of which Orr assisted on. Before the period ended, Henri Richard stripped Orr of the puck at the Boston blueline and deked Johnston to make it 5-2 Bruins. Jean Beliveau poked in a rebound on the power play early in the third period before scoring his second goal at little over a minute later to make it 5-4 Bruins. At 9:59, Ken Hodge's weak pass back to the point was picked off by Jacques Lemaire who scored on a breakaway to tie the game. John Ferguson gave Montreal the lead with a close-in one-timer before Frank Mahovlich scored on a breakaway to give the Canadiens a shocking 7-5 win. Ed Johnston couldn't be faulted for any of the goals against. Loose defensive coverage, especially by Derek Sanderson's line, who were a combined -10, resulted in the loss.

Game 3 at the Montreal Forum was a tight-checking match filled with penalties, 17 total were called. Despite the many manpower advantages, no power play goals were scored. Cheevers was back in the net for the Bruins but he was outplayed by Dryden who faced 38 shots. After Phil Esposito opened the scoring 29 seconds in, the parade to the penalty box started, which included a fight between Ted Green and Peter Mahovlich. Frank Mahovlich tied the score 4:04 into the second period before Jacques Laperriere put Montreal ahead at 12:05. Boston had several power plays after Laperriere's goal but couldn't take advantage. No power plays resulted in the third period in which Frank Mahovlich scored his second of the game to give Montreal a 3-1 victory and a two games to one lead in the series.


Game 4 at Montreal saw Bobby Orr give one of his best single game performances. As with Game 3, the first two periods were filled with penalties, with 19 called. Frank Mahovlich scored the only goal of the first period, on the power play at 5:30. Orr tied the game at 11:01 of the second period on an amazing play. Dryden came out of the net and poked the puck into the corner, which caromed into the air parallel to the goal line. Orr swatted the puck mid-air, which bounced through Dryden's legs, hit the post and went in. Mike Walton put the Bruins up 2-1 on the power play late in the period. In the third period, Orr's one-timer from the point made it 3-1 Boston, 37 seconds in. Yvan Cournoyer made it close at 6:13 but Fred Stanfield scored an insurance goal at 17:21. With Don Awrey in the box for the only penalty of the third period, Montreal pulled Dryden for an extra attacker. Orr scored a short handed, empty net goal with 3 seconds left to seal Boston's 5-2 win. His Hat trick was only the second in NHL playoff history by a defenseman to that point, George Boucher having scored the first in the 1921 NHL Championship.


Game 5 at Boston was dominated by the Bruins, driven by another great performance from Bobby Orr. Wayne Cashman opened the scoring in the game's first minute before Yvan Cournoyer tied it up at 5:38. Orr then assisted on goals by Phil Esposito and Mike Walton. In the second period, John McKenzie staked Boston to a 4-1 lead before taking a penalty at 16:59. Orr grabbed the puck in the neutral zone, rushed around the Habs net and fed a backhand to Ed Westfall who scored a shorthanded goal to make it 5-1 Bruins. Goals by Frank Mahovlich and John Ferguson early in the third period cut the lead to 5-3. Unlike Game 2, the Bruins prevented a comeback with the first goals of the series from John Bucyk and Ken Hodge. Boston's 7-3 win saw them out shoot Montreal by a wide margin, 56-27, and take a three games to two lead in the series.

Game 6 at Montreal was the only game the Canadiens dominated in the series as they out shot the Bruins 43-32. Montreal goals by Peter Mahovlich and Henri Richard were countered by Phil Esposito and Fred Stanfield as the game reached the halfway mark. Montreal broke the game open with goals by Jacques Lemaire, J.C. Tremblay and then Richard and Mahovlich's second goals of the game. Derek Sanderson got one back with less than four minutes to go in the game before Marc Tardif and Jacques Laperriere completed the 8-3 rout and tied the series at three games each.

Game 7 at Boston saw Ken Dryden play his best game of the series as the Bruins out shot the Canadiens 48-34. Ken Hodge opened the scoring at 6:50 of the first period after picking off a clearing pass and firing a shot past Dryden's glove. At 14:48, Frank Mahovlich knocked a pass out of mid-air past Cheevers to tie the game before Réjean Houle scored his first career playoff goal by tipping in a Peter Mahovlich slapshot. J.C. Tremblay scored the only goal of the second period, firing a shot over Cheever's glove. Frank Mahovlich scored 14 seconds into the third period after Jacques Lemaire stripped Orr of the puck at the Bruins blueline. Fred Stanfield cut the lead to 4-2 less than a minute later but despite peppering Dryden with shots, the Canadiens held on for a 4-2 win to take the series.

For more details on this topic, see 1970 NHL Amateur Draft. 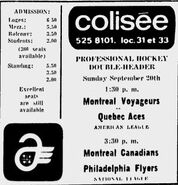 The Canadiens in October. 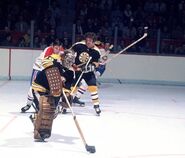 Five minutes of coverage of the Bruins-Canadiens bench-clearing brawl during the last minute of the first period, November 8, 1970.

Highlights of the goals from the Bruins-Canadiens Game 2 of the 1971 Quarter-finals on April 8, 1971.