The 1969 Frozen Four was held March 13-15, 1969, in Colorado Springs, Colorado, for the first and only time since the tournament first left its formerly permanent home there. The first ten Frozen Fours were held in Colorado Springs. The semifinal round and the championship game was held at Broadmoor World Arena. The third place game was held at Cadet Ice Arena on the campus of the United States Air Force Academy.

The 1969 Frozen Four was the first NCAA hockey tournament to be held in more than one building - the tournament expanded from 4 to 6 teams in 1977 - and is the only Frozen Four to hold that distinction. 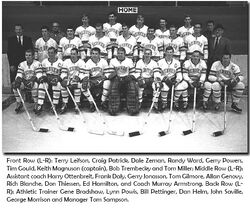