The 1969-70 NHL season was the 53rd season of the National Hockey League. Twelve teams each played 76 games. For the third straight season, the St. Louis Blues reached the Stanley Cup finals, and for the third straight year, they were swept four games to none. This time, however, it was the Boston Bruins, not the Montreal Canadiens, who swept them for the Stanley Cup.

Bobby Orr of the Boston Bruins became the first defenceman in NHL history to win the league scoring championship. He did it by setting a new record for assists with 87 and totalling 120 points, only six shy of the point record set the previous season by teammate Phil Esposito. Along the way, he also won the Norris Trophy for the third straight year as the top defenceman, the Hart Trophy for league MVP, and the Conn Smythe Trophy for the playoff MVP.

Gordie Howe finished the season within the ten leading NHL point scorers for an all time record of 21 consecutive seasons.

For the third straight season, the St. Louis Blues easily won the West Division, being the only team in the division to have a winning record.

The East Division, however, saw a temporary changing of the guard, as Montreal dropped from first the previous season to fifth, missing the playoffs on goal differential with New York. This led to an unusual incident where in their final game and down 5-2 to Chicago, the Canadiens would make the playoffs if they scored three more goals regardless of the game's outcome. Coach Claude Ruel pulled his goaltender with nearly nine minutes left in the third period in an ultimately unsuccessful attempt to do so. Chicago would score five times into the empty Montreal net, to win 10-2. It would be the only season Montreal failed to make the playoffs between 1948 and 1995 and set up the only playoffs in NHL history (as of 2007) to feature no Canadian teams. These developments were instrumental in the decision to move Chicago to the West Division in conjunction with the 1970 expansion, and the adoption of "crossover" playoff series between East and West Division teams the following season. The continuing imbalance led to the exclusion of West Division teams from the Stanley Cup final for the next three seasons.

The New York Rangers were in first place for a time, but injuries on the blueline doomed any hope of a first place finish. The Rangers obtained Tim Horton in desperation.

The Bruins and the Black Hawks both tied for the lead in the East with 99 points, but Chicago was awarded first place because they had more wins. It was Chicago's first first-place finish in history.

The Boston Bruins and New York Rangers were paired in the East Division playoffs. The Bruins clobbered the Rangers 8-2 in game one and Ranger coach Emile Francis yanked Ed Giacomin when the score reached 7-1. Terry Sawchuk took over in goal. Sawchuk replaced Giacomin in game two, but a new goaler was not the answer as Boston won 5-3. Game three featured a disgraceful welcome of the Bruins when they skated out on Madison Square Garden ice. The fans booed and shouted obscenities at the Bruins players, shook their fists at them and made obscene gestures at them. Two Bruins players made obscene gestures at the fans. Gerry Cheevers, the Bruins goaltender, was the target of eggs, coins and rubber balls. The Bruins won the opening face-off and Giacomin made the save on Phil Esposito. The line of Derek Sanderson, Don Marcotte and Ed Westfall replaced the Esposito line to the boos of the crowd. Just before the face-off, Giacomin skated to Sanderson and reportedly said "We're being paid to get you tonight." On the face-off, the puck went behind the Ranger net and Sanderson went after it. He was immediately smashed into the boards by Walt Tkaczuk and Arnie Brown. Then he collided with Dave Balon. Sanderson dropped his stick and gloves and went at Balon, which brought Brad Park and Bill Fairbairn into the fight. Don Marcotte joined in. Then the game erupted into a series of fights. The fans, turned on by the mayhem, threw eggs, apple cores, an aerosol shave cream container, oranges and other debris. When Sanderson was ejected from the game, he screamed at referee John Ashley. Police grappled with fans trying to attack the Bruins players at the Bruins players bench. The game erupted into more fights and brawls on the ice and fans threw eggs, nails, coins and other garbage. It took 19 minutes to play the first 91 seconds of the game. When the most violent, penalty-ridden game in playoff history [to this time] was over, the teams had set a record 38 penalties for 174 minutes. Almost forgotten was that the Rangers won 4-3. Game four had Rod Gilbert score two goals in a 4-2 Ranger win. Giacomin was brilliant in goal for the Rangers and one of the highlights was stopping Derek Sanderson on a shorthanded breakaway. Game five was won by Boston 3-2 as Esposito scored two goals. Bobby Orr set up the winner when he stole a pass at center ice when the Rangers were foolishly caught on a line change. Game six was won easily by the Bruins and featured another disgraceful exhibition of fan abuse. Bobby Orr scored two goals, including the winner. Fans threw eggs, and ball bearings on the ice, and when the outcome was no longer in doubt, they set fires in the mezzanine of Madison Square Garden.

In the Chicago-Detroit series, the Black Hawks swept the series, ironically, all four games by 4-2 scores.

In the West Division playoffs, the St.Louis Blues ousted the Minnesota North Stars in six games. The Blues won the first two games at the St. Louis Arena. Game three at the Metropolitan Sports Center featured Gump Worsley's sharp goaltending and Bill Goldsworthy scoring two goals in a 4-2 win for the North Stars. Cesare Maniago played in goal for Minnesota in game four and picked up a 4-0 shutout, tying the series. Game five at St. Louis Arena was tied 3-3 when St Louis scored three goals in the third period by Red Berenson, Terry Gray and Jim Roberts and the Blues won 6-3. In game six, Ab McDonald scored two goals as the Blues eliminated the North Stars by a score of 4-2.

In the Pittsburgh-Oakland series, in game one, Nick Harbaruk's goal midway through the third period was the winner as Pittsburgh won 2-1. In game two, Gary Jarrett gave Oakland a 1-0 lead, but Pittsburgh came back to win 3-1. Game three at Oakland featured a hat trick by Ken Schinkel of the Penguins as Pittsburgh won 5-2. Game four featured Oakland having 1-0 and 2-1 leads, but the Seals just couldn't hold on and the game was tied 2-2 at the end of regulation time. Overtime was necessary and Michel Briere scored the series winning goal at 8:28 of overtime for Pittsburgh.

In the West Division finals, the St. Louis Blues beat the Pittsburgh Penguins in six games.

The Stanley Cup final would then be Boston vs. St. Louis.

The following is a list of players of note who played their first NHL game in 1969-70 (listed with their first team, asterisk(*) marks debut in playoffs):

The following is a list of players of note that played their last game in the NHL in 1969-70 (listed with their last team): 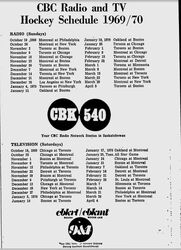 Retrieved from "https://icehockey.fandom.com/wiki/1969-70_NHL_season?oldid=667048"
Community content is available under CC-BY-SA unless otherwise noted.