The 1969–70 St. Louis Blues season was the team's third season in the National Hockey League (NHL). The Blues finished 1st in the West Division for the second consecutive season, defeated the Minnesota North Stars and Pittsburgh Penguins in the playoffs, winning both series 4 games to 2, before losing the 1970 Stanley Cup Finals in four straight to the Boston Bruins.

The Boston Bruins played the St. Louis Blues in an exhibition game on September 21, 1969 at the Ottawa Civic Center. At the 13-minute mark of the first period, the Blues Wayne Maki shot the puck over the blue line into the Bruins corner. Ted Green played the puck with his skate and Maki hit him from behind. Green shoved Maki to the ice and the referee, Ken Bodendistel, raised his arm for a penalty to Green. From his knees, Maki speared Green in the genitals. Green swung his stick and slashed Maki on the arm, once again knocking him to the ice. As he turned away to go to the penalty box, Maki smacked him over the head with his stick, crushing part of his skull. The left side of Green's body was paralyzed and his speech slurred. Bobby Orr jumped over the boards and pummelled Maki while his teammates carried Green to the dressing room. Green had emergency surgery and missed the entire 1969-70 season. Maki was suspended for a month. Criminal charges were laid against both but resulted in acquittals. Green returned for the 1970-71 season. Maki played for several seasons until diagnosed with brain cancer. He died in 1974.

Jaroslav Jirik became the first player from an Eastern Bloc country to play in the NHL when he suited up for the Blues on March 22, 1970 in their 1-0 loss to the Chicago Black Hawks. He played a total of 3 games with no points and then returned home to Czechoslovakia.

Phil Goyette became the first Lady Byng Memorial Trophy winner in franchise history and he led the team with 78 points.

The Blues were the only team in the West Division with a winning record as they finished 22 points ahead of the second place Pittsburgh Penguins. The Blues matched their previous season's total of 37 wins but finished with 86 points, two points shy of the previous season's points total.

From a goaltending standpoint, the franchise experienced many changes. Glenn Hall had retired at the end of the 1968–69 season but returned. Despite an appearance in the All-Star Game, Jacques Plante played his final season in St. Louis. He was sold by the Blues to the Toronto Maple Leafs for cash, May 18, 1970. Ernie Wakely was acquired from the defending Stanley Cup champion Montreal Canadiens and became the Blues starting goaltender for the following season.

As he did with the Chicago Black Hawks in 1966, Hall retired from St. Louis at the end of the 1968–69 season.[1] He was talked into returning, usually with a promise of more money, but he didn't profess to enjoy his livelihood.[1] Although Hall stayed in St. Louis, he still got nauseous before each game as he did earlier in his career.

Wakely had to take over from the legendary Glenn Hall. Wakely made the most of his opportunity as he helped lead the Blues to the Stanley Cup Finals.

In the West Division playoffs, the St. Louis Blues ousted the Minnesota North Stars in six games. The Blues won the first two games at the St. Louis Arena. Game three at the Metropolitan Sports Center featured Gump Worsley's sharp goaltending and Bill Goldsworthy scoring two goals in a 4–2 win for the North Stars. Cesare Maniago played in goal for Minnesota in game four and picked up a 4–0 shutout, tying the series. Game five at St. Louis Arena was tied 3–3 when St. Louis scored three goals in the third period by Red Berenson, Terry Gray and Jim Roberts and the Blues won 6–3. In game six, Ab McDonald scored two goals as the Blues eliminated the North Stars by a score of 4–2.

This was the first playoff meeting for the teams. Although the series is famous for "The Goal", Bobby Orr's overtime winner in Game 4, Orr had (for him) a relatively quiet series from a scoring standpoint with the goal and five points. This could be credited to checking by the Blues Jim Roberts. John Bucyk had six goals and if not for his tying goal in Game 4, there would have been no Orr heroics. Phil Esposito had two goals and eight points in the series, for a record playoff total of 27 points. Gerry Cheevers played every minute in goal for the Bruins.

Game 1 at the St. Louis Arena saw Jacques Plante start in net for the Blues. He and Cheevers were stalwarts in the first period, stopping everything until with 15 seconds left, John Bucyk pulled up in the slot and fired a shot past Plante through a screen. Two minutes into the second period, Jim Roberts took a pass in the slot and fired a spinning backhand past Cheevers to tie the game 1-1. Tragedy struck St. Louis two minutes later when a Fred Stanfield slapshot was tipped by Phil Esposito, which struck Plante in the mask. He was knocked unconscious and lost for the remainder of the series. Ernie Wakely replaced Plante and it didn't take the Bruins long to score on him. Esposito retrieved the puck behind the Blues net, passed to John McKenzie whose spinning backhand pass found Bucyk alone at the left side of the net where he potted his second of the game.

After a confrontation in the first period, Wayne Cashman and Noel Picard fought at 12:52 then, Cheevers robbed Bob Plager who had a clear shot in the slot. With three minutes left in the period, Dallas Smith took a penalty, followed 1:20 later by one to Phil Esposito. The Blues couldn't capitalize on the 5 on 3. Five minutes into the third period, Derek Sanderson stripped Andre Boudrias of the puck. His pass to Don Awrey was relayed to Wayne Carleton who snapped it over Wakely's shoulder. Less than a minute later, Bucyk scored his Hat trick goal after an up-ice rush that ended with him tapping in a rebound. With less than three minutes left while killing a penalty, Bobby Orr sent Sanderson on a breakaway. He fired a high shot on Wakely's stick side to make it 5-1 Boston. With a minute left, Phil Esposito stole the puck at the St. Louis blueline, rounded Noel Picard and then deked Wakely to make it 6-1 and give the Bruins the series lead.


Game 2 at St. Louis saw Wakely back in the net for the Blues. Unlike Game 1, where the Blues largely held the Bruins high-powered offense in check in the first period, Boston scored three in the opening frame. First on the power play, Phil Esposito's net drive was stopped but he passed the rebound to Fred Stanfield in the slot who made no mistake. Right after killing a John McKenzie penalty, Rick Smith fired a shot at Wakely and Ed Westfall scored on the rebound. With two minutes left in the period, the Bruins were given a too many men on the ice penalty, served by Bill Lesuk. Bobby Orr wielded his magic, blocking a shot and turning it into an up-ice rush. He dished a backhand to Ed Westfall who scored his second of the period to make it 3-0 Boston. With over nine minutes played, Westfall hit his head on the boards after being tripped by Bob Plager. On the ensuing power play, Phil Esposito carried the puck into the Blues zone and fired a hard pass into the slot which Derek Sanderson tipped in. At 17:36 on the power play, Terry Gray tipped in a Noel Picard shot to trim the Bruins lead to 4-1. In the first minute of the third period, Sanderson tapped in a rebound from a Dallas Smith point shot to extend the Bruins lead to 5-1. After Frank St. Marseille made it 5-2, John Bucyk skated through three Blues, deked Wakely and put a backhander into the top right corner. The Bruins took a two games to none series lead with a 6-2 win.


Game 3 at the Boston Garden saw Glenn Hall replace Wakely in the Blues net. If not for his outstanding play, the score would've been much worse as the Bruins poured 46 shots on him. St. Louis opened the scoring for the only time in the series when at 5:32 on the power play, Frank St. Marseille's centering pass deflected in off Dallas Smith. Later on a Bruins 4 on 3 power play, Glenn Hall's clearing pass was picked off by Fred Stanfield, who passed it to Phil Esposito. Hall stopped Esposito's shot but John Bucyk scored on the rebound to tie the game 1-1. At 18:23, a turnover in the Blues zone led to John McKenzie slapping a pass from Fred Stanfield in to make it 2-1 Boston. The second period was the only scoreless one in the series. Hall held the Blues in the game, turning aside 17 shots. A little over three minutes into the third period, Phil Esposito was stopped inside the Blues zone where Ken Hodge picked up the loose puck. His pass to Wayne Cashman sent him in alone and he beat Hall high to the glove side. Cashman marked again after retrieving the puck behind the Blues net, passing it out front, collecting the puck out of the scramble and scoring on his own rebound. Boston took a stranglehold on the series with a 4-1 win.


Game 4 at Boston was held on a Sunday afternoon, Mother's Day, and was the closest game of the series. Shots were nearly even and neither team led the score by more than a goal. At 5:28 of the first period, Derek Sanderson made a brilliant, no-look pass to the high slot where Rick Smith fired a one-timer over Glenn Hall's shoulder to make it 1-0 Boston. In the last minute of the period, Red Berenson scored off a rebound shot by Bob Plager to tie the game. At 3:22 of the second period, Gary Sabourin picked up a loose puck on the right wing and beat Cheevers low to the stick side. After the Blues Larry Keenan missed an open net, Phil Esposito won a face-off in the Blues zone and tied the game 2-2. In the first minute of the third period, on the power play, Keenan put a shot off Cheever's mask and into the net for a 3-2 Blues lead. After Fred Stanfield won a face-off in the St. Louis zone, John McKenzie fired a shot at Hall which John Bucyk tipped in to tie the game 3-3. Bobby Orr nearly scored on a wrap around with time winding down but the game went into overtime.

Derek Sanderson's line, with Wayne Carleton and Ed Westfall, started OT for the Bruins with Orr and Don Awrey. Sanderson dumped the puck into the Blues zone and Boston had several unsuccessful shots. Sanderson fired a shot which went wide and hit the right side boards. Keenan retrieved it, tried to shoot the puck out but it went off a pinching Orr who gained control. Orr executed a give and go with Sanderson, who was behind the net, and fired the Cup winning goal through Hall's pads. Just as he was raising his arms in triumph, he was tripped by Noel Picard. Orr flew through the air with his arms raised, landed and was mobbed by his teammates. Orr was awarded the Conn Smythe Trophy, becoming the only player in NHL history to win four major awards in a season.

Tommi Salmelainen was the first European drafted by an NHL franchise.[4]

Another view of the Maki-Green stick swinging incident, September 21, 1969.

Derek Sanderson and Ken Hodge go into the stands at St. Louis, March 4, 1970. 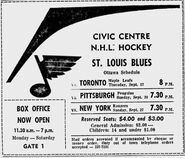 Over 13 minutes of highlights of the Bruins-Blues Game 1 of the 1970 Stanley Cup Finals mainly focusing on penalties taken in the first two periods then the Bruins four goals in the third period are shown.

Over 22 minutes of highlights from all four games of the Bruins-Blues in the 1970 Stanley Cup Finals.