The 1969–70 Pittsburgh Penguins season was the franchise's third season in the National Hockey League. The season saw the Penguins qualify for the playoffs, for the first time in franchise history. The Penguins finished the season in second place in the West Division, 22 points behind the first place St. Louis Blues.

Tragedy struck the Penguins in 1970 when promising rookie center Michel Briere, who finished third in scoring on the team, was injured in a car crash. After spending a year in the hospital, he died.

The Penguins would reach the playoffs for the first time in 1970, advancing to the Western Conference Finals where they lost to the St. Louis Blues. In the Pittsburgh-Oakland series, in game one, Nick Harbaruk's goal midway through the third period was the winner as Pittsburgh won 2–1. In game two, Gary Jarrett gave Oakland a 1–0 lead, but Pittsburgh came back to win 3–1. Game three at Oakland featured a hat trick by Ken Schinkel of the Penguins as Pittsburgh won 5–2. Game four featured Oakland having 1–0 and 2–1 leads, but the Seals just couldn't hold on and the game was tied 2–2 at the end of regulation time. Overtime was necessary and Michel Briere scored the series winning goal at 8:28 of overtime for Pittsburgh. In the West Division finals, the St. Louis Blues beat the Pittsburgh Penguins in six games.

The Penguins were involved in the following transactions during the 1969–70 season: 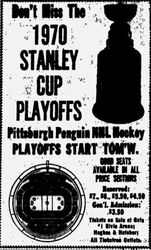 Retrieved from "https://icehockey.fandom.com/wiki/1969%E2%80%9370_Pittsburgh_Penguins_season?oldid=405308"
Community content is available under CC-BY-SA unless otherwise noted.