Ice Hockey Wiki
Register
Don't have an account?
Sign In
Advertisement
in: Philadelphia Flyers seasons, 1969 in hockey, 1970 in hockey

The Flyers took a chance when they selected a 19-year-old diabetic from Flin Flon, Manitoba named Bobby Clarke with their second draft pick, 17th overall, in the 1969 NHL Amateur Draft. They also drafted two other players that became significant in the team's rise, Don Saleski and Dave Schultz.

The Flyers wore the same jersey design as in the 1967-68 season.

By the time training camp came around it was clear that Bobby Clarke was NHL calibre and he quickly became a fan favorite. It took Clarke a few games to show his worth, he was -2 in his first game and didn't score until his 7th game, the tying goal during the 3-3 tie against the New York Rangers. An injury to Phil Goyette resulted in him playing in the 1970 NHL All-Star Game. Despite his 15 goals and 31 assists, the team struggled in 1969–70, recording a franchise worst in wins with 17.

On December 11, 1969, the Flyers introduced what became one of the team's best-known traditions, playing a recording of Kate Smith singing God Bless America instead of The Star-Spangled Banner before important games. The perception was that the team was more successful on these occasions, so the tradition grew. The move was initially done by Flyers promotion director Lou Scheinfeld as a way to defray national tensions at the time of the Vietnam War. Scheinfeld noticed that people regularly left their seats to walk around during the anthem, but showed more respect and often sang along to "God Bless America". To this day, the team plays the song before major playoff games.

General manager Bud Poile was fired on December 19, 1969. Keith Allen was named his replacement on December 22.

During the second period of the January 4, 1970 game against the Minnesota North Stars, Earl Heiskala had a run-in with North Stars goalie Fern Rivard. Both swung their sticks at each other but no penalties were called. Several minutes later, tempers flared by Minnesota's bench and Hieskala and Barry Gibbs fought. Within moments, everyone on the ice was involved, including goalies Rivard and Doug Favell. Punches were traded with the North Stars bench, Hieskala and Gibbs were ejected and the Flyers won 3-1.

The Flyers were battling for a playoff spot with the Oakland Seals and Minnesota with six games left in the season. They held a 5 point lead on the Seals and 6 points on the North Stars. They went on a five game losing streak, including a loss to Oakland. Philadelphia's last game was on April 4, 1970 against Minnesota. The North Stars and Seals were tied with the Flyers with 58 points and Minnesota had a game in hand. In a very tight defensive game, goalies Bernie Parent and Gump Worsley battled with neither surrendering a goal in the first two periods. Nearly eight minutes into the third period, a soft shot from center ice by Minnesota defenseman Barry Gibbs beat a surprised Parent. Worsley made a incredible save with less than 25 seconds left and the game ended 1-0, clinching a playoff spot for the North Stars.

Oakland lost their last game but had more wins than the Flyers and gained the final playoff spot. The Flyers missed the playoffs for the first time and set an NHL record for the most ties in one season with 24.

The Flyers were involved in the following transactions before/during the 1969–70 season.

Philadelphia's picks at the 1969 NHL Amateur Draft in Montreal, Quebec.[3]

The Flyers were affiliated with the Quebec Aces of the AHL, the Flint Generals of the IHL, and the Jersey Devils of the EHL.[4][5] 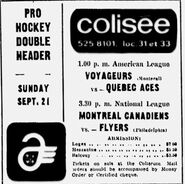