The 1969–70 Montreal Canadiens season was the club's 61st season of play. The Canadiens placed fifth in the East Division and missed the playoffs for the first time since the 1947-48 season.

April 5, 1970 – The Montreal Canadiens were in a desperate race to qualify for the NHL playoffs. The Canadiens hosted the Chicago Blackhawks. With 9 minutes and 30 seconds left in the third period, Montreal was down by a score of 5–2. Montreal's only hope of qualifying for the playoffs was to score five more goals. Canadiens coach Claude Ruel removed his goalie, Rogatien Vachon from the net. Vachon would return to the net only for faceoffs. Chicago would score five empty net goals and win the game by a score of 10–2. Montreal would miss the playoffs for the first time in 22 years.

Bobby Orr checked by four Canadiens during the 1969-70 season. 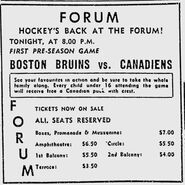 Retrieved from "https://icehockey.fandom.com/wiki/1969%E2%80%9370_Montreal_Canadiens_season?oldid=688585"
Community content is available under CC-BY-SA unless otherwise noted.