The 1968–69 St. Louis Blues season was the team's second season in the National Hockey League (NHL). The Blues finished 1st in the West Division, swept the Philadelphia Flyers and the Los Angeles Kings in the playoffs, winning both series 4 games to 0, before losing the 1969 Stanley Cup Finals in four straight to the Montreal Canadiens for the second straight season.

On November 7, 1968, Red Berenson scored six goals in a road game in an 8-0 drubbing of the Philadelphia Flyers. He became the first player to score a double hat trick on a road game.[1]

During the November 13, 1968 match against the New York Rangers, the Blues' starting goaltender Glenn Hall was ejected from the game two minutes into it. Jacques Plante was delayed in taking Hall's place so 21 year old Robbie Irons played three minutes, his only NHL game. The Blues won 3-1.

Goalie Gary Edwards played his first NHL game on December 11, 1968 in a 6-3 loss to the Chicago Black Hawks. Edwards came in for the last 3:49 of the game and would go on to play 286 games. Norm Dennis played the first game of his 12 game NHL career with his debut against Chicago on January 11, 1969.

On March 1, 1969, Bill Plager was called up from the minors and played defense against the Montreal Canadiens alongside his brothers Bob and Barclay. This was the second time in NHL history three brothers played together on the same team, the first time all three were defensemen. Doug, Reg and Max Bentley were the first, during the 1942–43 Chicago Black Hawks season.

Goaltenders Glenn Hall and Jacques Plante shared the Vezina Trophy as the NHL's top goalie tandem for that season. For Hall, it was his third Vezina, while Plante, who had come out of retirement during the summer of 1968, took home his seventh. It was the second major award that an NHL expansion team has earned. Hall also earned the Conn Smythe Trophy as the NHL Playoffs MVP the previous season.

St. Louis made the following picks at the 1968 NHL Entry Draft: 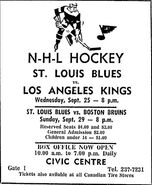