The Flyers wore the same jersey design as in the 1967-68 season.

Lou Angotti, who was the first captain of the club, was traded and replaced by defenseman Ed Van Impe in that role. Van Impe's defense and the team-leading 24 goals of André Lacroix were not enough as the Flyers struggled and finished 15 games under .500. Despite the poor regular season showing, they made the playoffs. However, they were manhandled by St. Louis in a four-game sweep. Not wanting his team to be physically outmatched again, owner Ed Snider instructed General Manager Bud Poile to acquire bigger, tougher players.[2]

Red Berenson of St. Louis tied an NHL record, scoring six goals for the Blues in an 8-0 conquest of the Flyers on November 7, 1968. Doug Favell was the victim of the goals.

The Flyers were involved in the following transactions before/during the 1968–69 season.

Philadelphia's picks at the 1968 NHL Amateur Draft in Montreal, Quebec.[5]

The Flyers were affiliated with the Quebec Aces of the AHL, the Seattle Totems of the WHL, and the Jersey Devils of the EHL.[6][7] 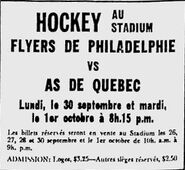 Retrieved from "https://icehockey.fandom.com/wiki/1968–69_Philadelphia_Flyers_season?oldid=723712"
Community content is available under CC-BY-SA unless otherwise noted.