The 1967 Stanley Cup playoffs, to decide the 1967 championship of the National Hockey League (NHL) was the last before the expansion from six to twelve teams. The Toronto Maple Leafs defeated the defending champion Montreal Canadiens in six games to win the Stanley Cup. As of 2010, it is the most recent time Toronto has won the Cup. The Leafs' squad was renowned as the oldest ever to win a Cup final; the average age of the team was well over thirty, and four players were over forty.

In the semi-finals, the Chicago Black Hawks in first place played the third-place Toronto Maple Leafs. The second-place Montreal Canadiens played the fourth-place New York Rangers. The winner of the semi-finals series would play for the championship and Stanley Cup.

Despite Chicago's impressive regular season marks, it was the third seed Toronto Maple Leafs who beat the Black Hawks in the first round of the playoffs.

Montreal swept the Rangers in the minimum four games.

The Maple Leafs now faced the Canadiens for the Stanley Cup. After splitting the first four games, the Maple Leafs won games five and six to win the series. 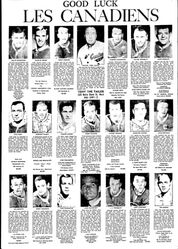