The 1967 Montreal Centennial University Tournament was held in Montreal, Quebec, Canada from January 4 to January 6, 1967. It was a part of Canada's centennial year celebrations.

Teams included one group of the four teams in Montreal:

The other group included high ranking teams from across Canada: 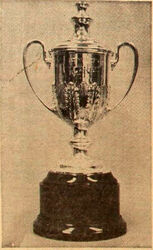 Tournament trophy
Add a photo to this gallery

Retrieved from "https://icehockey.fandom.com/wiki/1967_Montreal_Centennial_University_Tournament?oldid=406493"
Community content is available under CC-BY-SA unless otherwise noted.