The 50th Anniversary of the Russian Revolution Tournament was held in the cities of Moscow, Leningrad, and Voskresensk in the Soviet Union. The games were played between November 20, 1967, and December 6, 1967.

The once-only tournament was held to celebrate the 50th anniversary of the Russian Revolution of 1917. It was repeated and became the Izvestia Tournament the following year.

It is now known as the Channel One Cup. 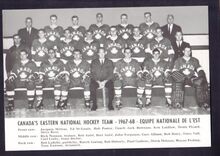 Canada
Add a photo to this gallery
Retrieved from "https://icehockey.fandom.com/wiki/1967_50th_Anniversary_of_the_Russian_Revolution_Tournament?oldid=301735"
Community content is available under CC-BY-SA unless otherwise noted.