The 1967-68 NHL season was the 51st season of the National Hockey League. Twelve teams each played 74 games. The Montreal Canadiens would win the Stanley Cup against the new St. Louis Blues.

This season saw the NHL expand from the "Original Six" teams by adding six new franchises. The St. Louis Blues, California Seals, Philadelphia Flyers, Minnesota North Stars, Pittsburgh Penguins, and Los Angeles Kings were all put into the Western Division. On December 8, 1967, the California Seals were renamed the Oakland Seals.[1]

This year also saw the addition of two new awards. With expansion came format change and with format change came a need for a new trophy for the winner of the newly formed West Division. The new trophy, called the Clarence S. Campbell Bowl, was for the winner of the West while the older trophy, the Prince of Wales, was now to be given to the winner of the East Division. Because of that, the NHL increased its regular-season schedules from 70 games per club (14 games X five opponents) to 74 games per club (50 games with teams within its own division, 24 games with teams in the opposite division).

The other new award was the Bill Masterton Memorial Trophy, which was named in honour of Bill Masterton who died on 15 January, 1968 after sustaining an injury during a game (the first time a NHL player had ever died directly as a result of an on-ice injury).

The minimum age of players subject to amateur draft was changed to 20.[1]

There were a large number of holdouts this year. Three New York Ranger players, including Rod Gilbert, Arnie Brown and Orland Kurtenbach were fined $500 by their team. However, Ed Van Impe of the Flyers refused to sign his contract, followed by Earl Ingarfield and Al MacNeil also refused to sign, then Tim Horton of Toronto, Norm Ullman of Detroitand Ken Wharram and Stan Mikita of Chicago. Led by Alan Eagleson, the new NHL Players Association was up and running.

The Canadiens stumbled out of the gate. In their first west coast road trip, the Seals beat them 2-1 and the Kings beat them 4-2. The Habs lost quite a few more and were in last place by December. But by January, Jean Beliveau began to score and others were inspired also. The Habs got very hot, winning 12 consecutive games and then put together 10 more wins to take the East Division lead. Paced by Gump Worsley, who had 6 shutouts and a 1.98 goals against average and backstopped the team to the fewest goals allowed in the league, managed to keep first place thereafter. Worsley, for the first time, made the first all-star team.

On February 24, 1968, Rogatien Vachon of Montreal was the victim of four goals by Rod Gilbert, who set an NHL record with 16 shots on goal.

Ed Giacomin again led the league with 8 shutouts, and led the Rangers to second place, bolstered by Jean Ratelle's emergence into stardom.

Boston obtained Phil Esposito, Ken Hodge and Fred Stanfield in a blockbuster trade with Chicago. This trade, as shown over time, heavily favored the Bruins. This, coinciding with the rise of Bobby Orr, led to an improvement in Boston's play, and the Bruins led the league in scoring behind Esposito's 84 points and made the playoffs for the first time in nearly a decade. Though he missed action with a knee injury, Orr still won the Norris Trophy as the league's top defenceman.

By contrast, the Chicago Black Hawks fell into a tailspin, and despite the scoring heroics of Bobby Hull and Stan Mikita, were hard pressed to make the playoffs. Mediocre team defense and goaltending was the culprit.

Roger Crozier felt the strain of goaltending and walked out on Detroit. He came back, but the Red Wings finished last anyway, despite a potent offense led by Gordie Howe, Alex Delvecchio and Norm Ullman. Even a late season trade of Ullman and Paul Henderson for Toronto star Frank Mahovlich and future Blues star Garry Unger was too little, too late. However, on March 24, 1968, Mahovlich became only the 11th player to score 300 goals as he scored both his 300th and 301st goals in a 5-3 win over the Boston Bruins.

Meanwhile, the defending Cup champion Toronto Maple Leafs, still steady on defense in front of elder statesman Johnny Bower and backup Bruce Gamble, had numerous problems. Mahovlich spent time in hospital with a nervous breakdown, and the season was marred by contract disputes and tension with the high-strung coach, Punch Imlach. A late season charge failed to win a playoff berth.

The Los Angeles Kings were a team that writers predicted to finish last in the new West Division. [2] Owner Jack Kent Cooke had purchased the American Hockey League's Springfield Indians for $1 million to bolster the Kings roster. Surprisingly, the Kings finished second, just one point out of first. Bill Flett scored 26 goals, while Eddie Joyal scored 23 goals, adding 34 assists for 57 points and was the second leading scorer in the West Division.

Glenn Hall may have been deemed too old by the Black Hawks, which left him unprotected in the expansion draft, but not for the St. Louis Blues, who rode his five shutouts to a third place finish. A surprising benefit was their leading scorer, previously unheralded Red Berenson (with only 45 points in 185 previous NHL games) who exploded into stardom, more than doubling his career total in only 55 games.

By contrast, the Pittsburgh Penguins finished fifth, led by former Ranger star Andy Bathgate. Behind an elderly roster -- nine of their top ten scorers and both of their goaltenders were over thirty -- they could neither muster much offense nor defense.

The Minnesota North Stars had their bright moments despite finishing fourth in the West Division. On December 30, 1967, Bill Masterton and Wayne Connelly each scored goals in a 5-4 upset win over the Boston Bruins. On January 10, Connelly -- who would finish the season with 35 goals to lead his team and the West Division -- had a hat trick in a 6-4 win over the West Division power, the Philadelphia Flyers and Masterton was the architect on all three goals.

Tragedy struck the league on January 14, 1968. In a game at the Metropolitan Sports Center in Bloomington, Minnesota, the Oakland Seals were in town to play the North Stars and Bill Masterton led a rush into the Oakland zone. Two defenceman, Larry Cahan and Ron Harris braced for the old fashioned sandwich check and as Masterton fired the puck into the Seals zone, the two hit Masterton hard but cleanly. Masterton flipped backwards and hit his head on the ice. He was removed to a Minneapolis hospital where doctors were prevented from doing surgery by the seriousness of the head injury. Early on the morning of January 15, 1968, Bill Masterton died. He was the first player to die as the direct result of injuries suffered in an NHL game, the only such incident in a senior game since 1907.

The following is a list of players of note who played their first NHL game in 1967-68 (listed with their first team, asterisk(*) marks debut in playoffs):

The following is a list of players of note that played their last game in the NHL in 1967-68 (listed with their last team): 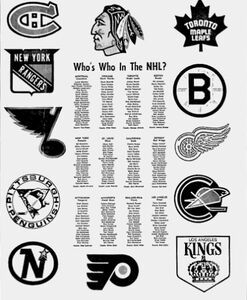 Season Opening Rosters
Add a photo to this gallery

Retrieved from "https://icehockey.fandom.com/wiki/1967-68_NHL_season?oldid=412429"
Community content is available under CC-BY-SA unless otherwise noted.