The 1967-68 Toronto Maple Leafs season was Toronto's 51st season in the NHL. The Maple Leafs finished 5th in the East Division and missed the playoffs.

The Maple Leafs held their training camp in Peterborough, Ontario.

The following Maple Leafs were lost to various franchises in the Expansion Draft.

Called up from the London Nationals of the OHA, Garry Unger played his first NHL game on November 4, 1967 in a 4-2 win over the New York Rangers. The November 6, 1967 match versus Boston saw a bench clearing brawl at 5:28 of the second period. With the Bruins leading 1-0 on a Bobby Orr Power play goal, Leafs Brian Conacher was killing a penalty and dumped the puck into the Bruins zone as Orr approached him. Conacher's stick came up and broke Orr's nose. John McKenzie starting pummelling Conacher, who fell to the ice. Orr then joined in on beating Conacher, which resulted in the Leafs bench clearing, followed by the Bruins. It was the first bench clearing brawl in the league since December 6, 1963. The game ended in a 2-2 tie.

J. P. Parisé played his only game for the Maple Leafs on November 15, 1967 in a 4-2 win over the Bruins and recorded an assist. Having signed a contract with Toronto, Garry Unger was given a regular shift with Pete Stemkowski and Jim Pappin for the November 18, 1967 game versus the Chicago Black Hawks. Trailing 1-0 early in the second period, Stemkowski dug the puck out of the corner and his centering pass caromed to Unger who whacked in his first NHL goal past Denis DeJordy.

Disaster struck during the December 9, 1967 Bruins-Leafs game in Toronto. In the first period while killing a penalty to Skip Krake, Bobby Orr began to carry the puck from in front of the Bruins net. He was hit with a clean check by Frank Mahovlich which broke his left collarbone. Amazingly, Orr played another penalty-killing shift before leaving the game. Later, a Mahovlich slap shot hit Ted Green above the knee and he was forced to leave the game. Green's injury caused him to miss only two games but Orr was out until Christmas.

Mike Byers played his first NHL game on December 30, 1967 in an 8-1 win over the St. Louis Blues. The Maple Leafs hosted the 21st National Hockey League All-Star Game at Maple Leaf Gardens on January 16, 1968. Toronto beat a team of All-Stars by a score of 4-3. Mike Pelyk and André Hinse were both called up for their first NHL game, a 3-2 loss to Chicago Black Hawks on February 7, 1968. Hinse played three more games, his only in the NHL, while Pelyk became a regular, his first of nine seasons for the Maple Leafs.

With playoff chances fading, the Red Wings made a blockbuster trade with the Maple Leafs on March 3, 1968, sending Norm Ullman, Paul Henderson, Floyd Smith and Doug Barrie in exchange for Frank Mahovlich, Pete Stemkowski, Garry Unger and the rights to Carl Brewer. The teams met less than a week later on March 9 at Maple Leaf Gardens. Detroit took a 4-0 lead, led by Mahovlich's goal and two assists. However, Ullman turned the tide with two goals and an assist as Toronto came back to win 7-5. Despite excellent performances from Mahovlich, Ullman, Unger and Henderson for the rest of the season, both teams missed the playoffs.

The Maple Leafs were involved in the following transactions during the 1967-68 season. 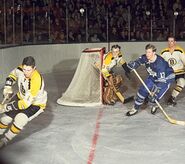 Nearly three hours of video from the Bruins-Maple Leafs game on January 6, 1968. All goals are shown including one by Bobby Orr which tied the game 3-3. An interview with Derek Sanderson is shown in the first intermission. During the second intermission, highlights from the December 27, 1967 Bruins-Black Hawks game are shown including a Hat trick by Phil Esposito. Milt Schmidt is then interviewed.

Retrieved from "https://icehockey.fandom.com/wiki/1967–68_Toronto_Maple_Leafs_season?oldid=723332"
Community content is available under CC-BY-SA unless otherwise noted.