Ice Hockey Wiki
Register
Don't have an account?
Sign In
Advertisement
in: Los Angeles Kings seasons, 1967 in hockey, 1968 in hockey

The 1967–68 Los Angeles Kings season was the franchise's 1st season in the National Hockey League. The Kings finished 2nd in the West Division and lost in the Division Semi-finals to the St. Louis Blues 4 games to 3.

The Kings were one of six expansion teams, which doubled the size of the league from six to twelve. The Kings were placed in the newly established West Division, along with the other expansion teams: the California Seals, Minnesota North Stars, Philadelphia Flyers, Pittsburgh Penguins and St. Louis Blues.

The Kings picked goaltenders Terry Sawchuk and Wayne Rutledge with their first picks of the Expansion Draft, but the Kings did not rely on the draft. Owner Jack Kent Cooke purchased the American Hockey League's Springfield Indians for $1 million to bolster the Kings roster. Long-time Indians player Brian Kilrea would score the Kings' first goal.

The Kings inaugural jersey colours were purple and gold with a primarily purple home jersey and a primarily gold away jersey. The jerseys had one stripe on the arms and body (on the purple jersey the body stripe was at the bottom while on the gold jersey it was near the bottom), no names on the back and the jersey numbers were not outlined. The logo was a white, purple and gold crown. These jerseys would remain in use with very minor modifications for the next decade.

The Kings held their training camp in Guelph, Ontario.

The Kings played their home games in three locations during that inaugural campaign. They alternated between both the Long Beach Arena and the Los Angeles Memorial Sports Arena before the brand new arena built by Cooke and known as The Forum would become their permanent home. In the first game ever at The Forum, they lost 2-0 to the Philadelphia Flyers. This loss came back to haunt them as they finished in 2nd place, one point behind the Flyers.

The Los Angeles Kings were a team that writers predicted to finish last in the new West Division.[1] Surprisingly, the Kings finished second, just one point out of first. Bill Flett scored 26 goals, while Eddie Joyal scored 23 goals, adding 34 assists for 57 points and was the second leading scorer in the West Division.

On December 13, 1967, the Minnesota North Stars and Cesare Maniago achieved the first shutout in team history, defeating the Los Angeles Kings 4-0. Maniago and the North Stars went on a shutout streak, beating the Kings 3-0 on December 15 and the Oakland Seals 1-0 on December 16. Maniago had his 4th shutout on January 3, 1968 as the Stars blanked the Kings for the third time, by 6-0. Maniago finished the season with 6 shutouts, tied for second best in the league and the most in a season in his career.

The Kings were the only team the Seals had some success against. In January 1968, Oakland won all three games versus Los Angeles, including shutting them out twice. Gerry Ehman had the Seals only Hat trick of the season in one of these games, on January 7, 1968 in a 6-0 win. The season series ended 4-4-2 between the teams.

The Kings combined to go 20-13-4 in their 37 home games spread over 3 arenas that first season. On the road, Los Angeles posted a record of just 11-20-6. The Kings finished a surprising second place in the Western Conference behind the coaching of Red Kelly, who as a player holds the distinction of playing on the most Stanley Cup championship teams without any of them including time in Montreal. The goaltending tandem of future hall of famer Terry Sawchuk and Wayne Rutledge allowed the team to stay in most games. The Kings had the best record of any of the expansion teams against the "Original Six", going a respectable 10-12-2, including winning their first two games ever against the storied Montreal Canadiens.

Doug Robinson and Lowell MacDonald led all Kings playoff scorers with 7 points, while Eddie Joyal and Gord Labossiere had 5 points each. 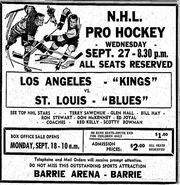