The 1966 World Ice Hockey Championships was the 33rd edition of the Ice Hockey World Championships. The tourmanent was held in Hala Tivoli, Ljubljana, Yugoslavia from March 3 to March 14, 1966. For the fourth straight year, the Soviet Union won the tournament.

Romania qualified in Group B 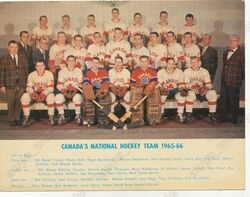 Radio Ad @ Toronto
Add a photo to this gallery

Retrieved from "https://icehockey.fandom.com/wiki/1966_World_Championship?oldid=431867"
Community content is available under CC-BY-SA unless otherwise noted.