The Soviet team cancelled their appearance at the Walter Brown Tournament at the last minute and asked the Canadian Amateur Hockey Association to come up with an alternate schedule quickly.

The best Canadian teams were already committed to the Moscow Selects and Czechoslovakia. The Canadian National Team was itself playing in the Walter Brown Tournament.

In November the Canadian Amateur Hockey Association had tried to set up a tour of Newfoundland by the National team but it was cancelled by an Air Canada strike.

In part to make up for that cancellation, and in part because of the lack of teams to play the Soviets, the Soviet team was put into Newfoundland and the Maritime provinces against some very weak teams. 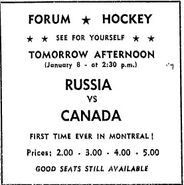 Jan. 8 @ Montreal
Add a photo to this gallery

Retrieved from "https://icehockey.fandom.com/wiki/1966-67_Soviet_Union?oldid=316456"
Community content is available under CC-BY-SA unless otherwise noted.