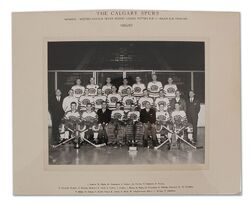 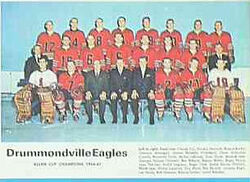 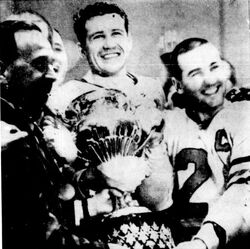 Aigles manager Roland Bolduc (left) and captain Raymond Fortin (#2) with the cup in their dressing room.
Add a photo to this gallery

Drummondville was an overwhelmingly Frnch-speaking city. The Spurs, while staying there, became very bored. There were no English movie theatres, very few English magazines or newspapers available, and the town was not very large. No civic receptions were held for the team and the Aigles management ignored the Spurs. The Spurs were stuck in their motel.

The Spurs were clearly outmatched in the series.

Some of them did go on to see Expo 67 in nearby Montreal after the series.

Retrieved from "https://icehockey.fandom.com/wiki/1966-67_Allan_Cup_Final?oldid=312115"
Community content is available under CC-BY-SA unless otherwise noted.