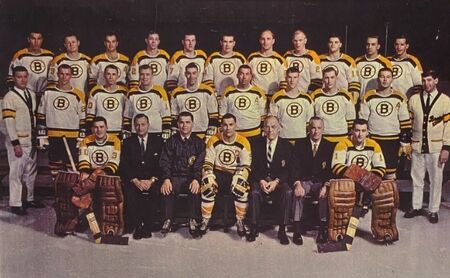 The 1966–67 Boston Bruins season was the Bruins' 43rd season in the NHL. The highlight of the season was the NHL debut of Bobby Orr. The Bruins finished in 6th in the league and did not qualify for the playoffs.

After the multitude of trades and transactions in the previous season, GM Hap Emms made none during the off-season, save purchasing Wayne Connelly from the San Francisco Seals. In the front office, Milt Schmidt was promoted to assistant GM and Harry Sinden took over as coach.

A star defenseman who had won the 1958 World Hockey Championship with the Whitby Dunlops and a silver medal at the 1960 Olympics, Sinden had been a player-coach for two of the Bruins minor league affiliates, the Kingston Frontenacs and the Oklahoma City Blazers. Only 33 years old, he was the youngest coach in NHL history at the time. However, he possessed detailed knowledge of Boston's talent pipeline and had played with many of those who would be a part of the team's resurgence.

Training camp opened on September 10, 1966 in London, Ontario with 38 players in attendance. Bobby Orr had an assist in the exhibition season opener and as the pre-season wore on, was paired with Gilles Marotte. Orr suffered a slight shoulder muscle tear during the October 1 game and was kept out of the line-up for the games on October 2 and 7.


Forbes Kennedy and Albert Langlois, who'd both played the previous season, did not make the Bruins line-up out of training camp. Bobby Orr had worn jerseys #19 and #27 during camp but with the departure of Langlois (who was sold to the Los Angeles Blades), Orr was given the jersey number Langlois had worn the year before, #4.

With Leo Boivin being traded the previous season, John Bucyk became team captain. After finishing out of the playoffs for seven consecutive seasons, many of the players who'd lead the Bruins to the post season in 1968 were in place. The goaltending tandem of Gerry Cheevers and Eddie Johnston shared the duties with Bernie Parent, the first time in NHL history that three goaltenders worked in regular rotation. Defensemen Ted Green, Don Awrey, Gary Doak and Rick Smith would all be part of the 1970 Stanley Cup team as would forwards John Bucyk, John McKenzie, Ed Westfall and Derek Sanderson, who all played in 1966-67. The Bruins had high hopes for young defensemen Gilles Marotte, Bob Woytowich and Joe Watson. Ron Schock played his first full NHL season while Wayne Connelly had his fourth stint with the Bruins.

However, the greatest reason for hope the Bruins would end their playoff drought was the debut of 18 year old Bobby Orr. The most heralded junior player since Jean Béliveau, Orr had shattered every record for junior defensemen and had scored 94 points in only 47 games in his last year playing for the Oshawa Generals. Orr easily made the team out of training camp.

Bobby Orr made his NHL debut in the season opener on October 19, 1966 and had an assist in a 6–2 win over the Detroit Red Wings. Hockey critics were impressed, citing that he played defense like a veteran, moved opponents from around the net, blocked shots and made adept plays in moving the puck from his own end. In Orr's third game on October 23, he picked off a pass from John Ferguson and fired a screen shot that tied up the game with the Montreal Canadiens for his first NHL goal. The Bruins demonstrated their improvement in October with close losses against Montreal and had a 1-3-1 record.

In the November 9, 1966 game versus the Chicago Black Hawks, Ed Johnston was hurt, requiring Bernie Parent to sub in for him. Gerry Cheevers was recalled, played the next eight consecutive games and showed he was ready to be an NHL starter. Tom Williams returned from injury on November 13 (he didn't start the season due to a right knee ligament strain) and the Bruins experienced relative success, with a 5-5-2 record in the month while beating every team at least once except the surprising New York Rangers. The top line of Bucyk, Murray Oliver, John McKenzie paced the Bruins scoring, while the Pit Martin, Ron Schock, Wayne Connelly line provided secondary scoring. Orr had his first fight on November 19 against Vic Hadfield of the Rangers and then his first two goal game on November 23, also against the Rangers. Derek Sanderson was recalled for the November 26 game against Toronto and also played the next night, 5-4 loss to Chicago. Ed Johnston returned for this game of November which Orr missed. The Bruins were just one point out of a playoff spot as the month ended.

However, disaster struck during the December 4, 1966 game versus the Toronto Maple Leafs. The Leafs Marcel Pronovost caught Bobby Orr with a hip check along the boards. Orr's left knee was twisted, straining the ligaments and resulting in him missing eight games. The Bruins only won once with Orr out of the line-up, continued to go winless after he returned and had a terrible 1-10-4 record in December. Scoring only 25 goals in 15 games during the month, it effectively ending any chance of making the playoffs. Williams and Bob Dillabough had no goals while first line center Murray Oliver had only 13 points total by month's end.

Team scoring improved in January as Tommy Williams returned to playing with his old "BOW Line" partners Bucyk and Oliver and the line began piling up goals. However, Williams was again lost to injury, and was in and out of the line-up the rest of the season. After playing 18 games and scoring twice, J. P. Parisé was sent to the minors and Wayne Rivers was recalled. Ed Johnston played the majority of the games in January and the Bruins had a 5-7-0 record in which many of the losses were by one goal. After a 6-1 loss to Chicago on February 1, the Bruins lost two close 4-3 games to Detroit on February 2 and New York on February 4. Bobby Orr scored his eighth goal of the season in the latter game on a solo rush, assisted by Eddie Johnston.

Bill Goldsworthy was called up and scored his first NHL goal during the February 11, 1967 game versus Montreal. However, the Bruins defense leader Ted Green injured his knee in this game. Requiring surgery, he missed the remainder of the season and Gary Doak was recalled. Without Green, the Bruins won only 4 of their last 20 games of the season. Skip Krake was recalled and scored his first NHL goal on Valentine's Day, 1967. He'd show promise and finish with 6 goals in 15 games. Orr continued scoring and accepted all fighting challenges. Showing prowess with his fists, veterans stopped running him. Despite playing on a team that allowed 71 more goals than it scored, Orr finished with a plus/minus of +1 and was second on the team in penalty minutes, behind Gilles Marotte. Marotte had the worst plus/minus, at -41. This would be one factor that led to him being traded.

Bobby Orr finished the season with 41 points, second among defensemen to only veteran Pierre Pilote of Chicago. Named to the Second All-Star Team, he won the Calder Memorial Trophy by a wide margin, with his defense partner Joe Watson finishing fourth in voting. Orr was sixth in voting for the Hart Memorial Trophy and third for the James Norris Memorial Trophy as best defenseman. The winner of the Norris Trophy, Harry Howell famously predicted that he was glad to win when he did, because "Orr will own this trophy from now on."

The 1966 NHL Entry Draft involved picking 18-year-olds. Unlike all the past drafts, several of the players picked played for the Bruins with Rick Smith and Garnet "Ace" Bailey playing on the two Stanley Cup winning teams in the 1970's. 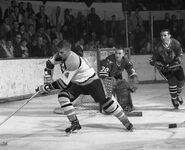 Bobby Orr, Denis DeJordy and Ed Van Impe (who was runner-up to Orr for the Calder Memorial Trophy) in 1966-67 season action. 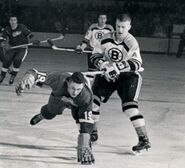 The second and third period of the Bruins-Leafs match from November 26, 1966.