This league was formerly the Central Alberta Hockey League.

Edmonton was a junior team. The others were senior.

Drumheller's arena had burned down before the season. The Miners played their home games @ Hanna.

The Drumheller Miners, as the only senior team left, were automatically the league's representatives in the Allan Cup playoffs. The Edmonton Oil Kings were waiting to join the Memorial Cup playoffs.

In the meantime the 2 teams agreed to play the league final. They agreed to ease the player eligibilty rules so to give some possible substitutes some playing time.

The two teams had to go on in their other playoffs. In fact the Oil Kings were already playing their junior series. The two teams were declared co-champions. 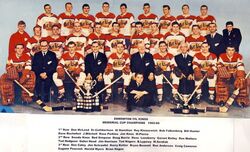 Edmonton Oil Kings
Add a photo to this gallery 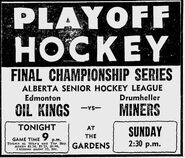 Final @ Edmonton
Add a photo to this gallery

Retrieved from "https://icehockey.fandom.com/wiki/1965-66_Alberta_Senior_Playoffs?oldid=605460"
Community content is available under CC-BY-SA unless otherwise noted.