The slogan was "Go Leafs, Go" and they went.

Combining the steady netminding of Jim Letcher with solid defensive protection in front, Nelson's Maple Leafs, 1964-65 version, became the first team to come out of the Queen City and win the western Canada Allan Cup final, as they outhustled the Warroad Lakers 6-3 Wednesday night, to take the best-of-five series in four games.

Murray Owen, Walt Peacosh, Bobby Kromm, Howie Hornby, Kenny McTeer and Dave Rusnell accounted for the Leafs' scoring, as Roger Christian fired two for the Lakers. Ron Farnfield, in picking up his first goal of the series, rounded out the Warroad total late in the third period.

Unlike Monday's game, the Leafs tightened up considerably in their own zone to bottle up oncoming Laker forwards before they had a chance to set up a play. Kromm, who elected to go with five defencemen, proved to be the inspiration the club needed, as he accounted for one goal and set up another, in again going both ways for the Leafs. His performance for the "Green and White" while a man short, held the Lakers to a standstill during five minors to the Leafs.

Owen opened the scoring at the 58-second mark of the first, when he beat Laker netminder Allie Reynard with a quick shot on a pass from Hornby. The Lakers, injury-ridden, bloostered their defensive corps with the returning Henry Ackervall and the back-checking ability of Billy Christian. Christian suffered a fractured check bone in the second game of the series, and was listed a doubtful starter for Wednesday night's contest. George Mylenchuk, scheduled to arrive from Calgary for Monday's game, was still nowhere to be found.

Christian filled his regular spot as pivot for brother Roger and Sam Grafstrom. The relentless hounding of the Laker forwards by Owen, the "Kamloops Flash" and the solid goaltending of Letcher, under fire from Murray Balagaus and Farnfield, staved off the Warroad club during a cross-checking penalty to defenceman Dave Stewart.

Rearguard Bill Steinke, rated a star in anyone's books for his work on the blueline, as he handed out stiff bodychecks, and successfully blocked countless screened slapshots before they reached the net.

An elbowing penalty to centre Ray Adduono set the until-now ineffective Leaf powerplay into motion, with Peacosh tipping the loose puck, after Reynard had stopped repeated shots. The Christians, the dominating force during the series for the Minnesota club, teamed up at 17:17, with Roger shovelling in brother Billy's goalmouth pass.

Relentless checking by forwards and defencemen alike, the keys to the Leaf playoff successes to date, continued to pay off, as the Lakers were forced to retreat time and again into their own territory.

The Leafs once again were quick to get on the scoreboard at the start of the second period, as Kromm trapped Leaf captain Shorty Malacko's long lead pass, to draw the lone defenceman out of position, and pick the inside corner with a waist-high shot. Five minutes later Hornby sent the Leafs ahead 4-1, when he connected on a drop pass from Kromm, from about 15 feet out. Owen almost picked up his second goal of the night, when he rapped a hard shot off the post, as Reynard was going the wrong way.

Letcher came up with the key save of the game early in the period, when he outguessed Billy Christian on a clean cut breakaway. A notably improved defence foiled the Leafs during a minor to winger Reg Morelli, as Bob McKee and Bill Matthews stood up well in face of rushing Nelson forwards.

The turning point in the game came when the shorthanded Lakers broke up a Leaf attack, and Letcher continued to be "unkind to the Christians" by robbing Bill home free in front. Both sides checked to the limit during minors to defenceman Frank Carlson and Morelli.

A roughing penalty to Harry Smith put Letcher on the spot again, as he blocked a screened drive by Ackervall from just inside the Nelson blueline, before the defence relieved the pressure. A blanket defence in the Leafs' zone never gave the Lakers a chance while the Nelson club was shorthanded. Reynard, who stopped a total of 126 shots in three games against the Leafs, cut off a sure goal near the seven minute mark, when he caught an intended pass across the goalmouth.

Rusnell, a tower of strength since he joined the Leafs following the Kimberley series, skated miles in coming back fast to support the already alert defence. McTeer took advantage of Ackervall's cross-checking penalty to click with a high shot over Reynard's shoulder, on a pass from Peacosh at 9:53. Rusnell made it 6-1 in favour of the Leafs, when he rolled a hard shot off the pads of Reynard, after winger Mike Laughton had set up the play.

Roger Christian and Farnfield tallied for the Lakers in the space of two minutes, as the Warroad club made a valiant effort at a comeback that proved to be too late. 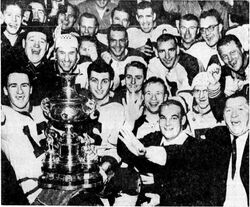 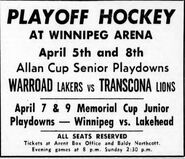