Calgary's neophyte senior hockey team gets its first taste of action Sunday afternoon at the Corral, when it skates out against the University of Alberta-Calgary Dinosaurs. The seniors have been out for more than a month, but this will mark their first official skirmish. The Dinnies have already played a handful of games and will meet the Drumheller Miners of the CAHL tonight at 8:30 at the Foothills Arena. Sunday's action gets under way at 2:30.

Three more players--Mick Gilday, Warren Hicks and Phil Latreille--have offically signed senior contracts. Gilday is a local product who graduated from the junior Buffaloes in 1954. The 31-year old left winger played two seasons in the Okanagan Senior League with the Vernon Canadians, followed by eight seasons with the Olds Elks of the CAHL. Midway through last year he was traded to the Drumheller Miners. An accomplished scorer, Gilday captured the CAHL point scoring title in the 1962-63 season. He was one of the big reasons why the Elks captured the western Canada intermediate "A" hockey championship that year.

Hicks, 27, is also a graduate of the junior Buffs, although he also played junior hockey in Melville and Yorkton. He later played senior hockey in the Okanagan and Kootenays, and in recent seasons has been a Big Six standout with the Adderson Builders, and CCRA Canadians. The 160 pound left winger scored 30 goals with the Canadians in 1963-64, and for three years was a runner-up for the BIg Six scoring title.

Latreille arrives on the scene with some pretty fancy press clippings. The 26-year old right winger performed with the Montreal Olympics when they went to the Allan Cup finals four years ago. In 1961 he had a four-game trail with the New York Rangers of the NHL and for two seasons was the most valuable player in the Eastern U.S. Collegiate League.

The Edmonton-Calgary hockey rivalry isn't dead, in fact it is very much alive. At least this is what Edmonton's Ken McAuley thinks.

And if anyone should know, it would be the former goalie of Edmonton's senior teams and coach of the Oil Kings for eight years. McAuley, in Calgary for business reasons Saturday night, was an interested spectator at the Golden Bears-Calgary senior hockey game, and confirmed dates where Edmonton's senior Nuggets squad will play a home-and-home series with Calgary. Calgary will meet the Nuggets in an exhibition test at the Edmonton Gardens December 18, and the two clubs will play a return game at the Corral New Year's afternoon.

McAuley is the business manager of the Edmonton club and reports that two members of his executitive and well known former Flyer players in the amateur days -- Gordon Watt and Harvey "Pug" Young -- have done a remarkable job in raising money for the Edmonton club. McAuley will be meeting with officcials of the Saskatchewan Senior Hockey League shortly to make plans for Calgary and Edmonton to join the circuit next year.

The Nuggets have been practising only about two weeks and need conditioning more than anything else, reports McAuley. "We have Hugh Currie as coach and some of the players working out are George McAvoy, Jack Nicholl from the Oil Kings, Don "Beaver" Poile, Frank Roggeveen, Ed Ehrenverth, John Utendale, and a former Oil King goalie by the name of Roy Turner. I'm not letting out any more names in the event (Bert-Charlie) Olmstead and his boys may not want to play us," said the former New York Ranger goalie. "But I'll tell you this. Anything Calgary can do, we can do better. We intend to bring in the Canadian National team for an exhibition game February 6," McAuley stated.

So enthused are the Edmonton players that they practise between 10 and 12 at nights when ice time is available at the Edmonton Gardens. With fellows like McAuley, Watt and Young promoting hockey in the Alberta capital and Ron Butlin, Lloyd Turner and Frank McCool here in Calgary, then senior hockey in the two Alberta cities, plus the proposed four teams from Saskatchewan next winter, it might not be too long before the Corral draws around 5,000 again. 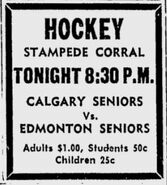 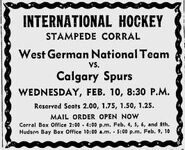