The 1964–65 Montreal Canadiens season was the 56th season of play of the club. The Canadiens won the Stanley Cup for the first time in five seasons, and the 13th time in franchise history, by defeating the Chicago Black Hawks in the 1965 Stanley Cup Finals 4 games to 2.

For more details on this topic, see 1965 Stanley Cup Finals.
Like the 1955 finals, every game was won by the home team. Gump Worsley made his first finals appearance after 12 years in the league and recorded two shutouts, including the one in game seven. Jean Beliveau was awarded the inaugural Conn Smythe Trophy as playoff MVP, scoring eight goals and eight assists in thirteen games.

J.C. Tremblay hugs Gump Worsley at the end of the seventh game. 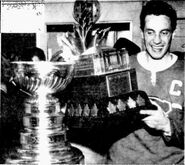 Jean Beliveau with the Stanley Cup and the Conn Smythe Trophy.

Jean Beliveau and Bobby Rousseau in the Stanley Cup parade.

Toe Blake, David Molson and Sam Pollock in the parade.