The 1964–65 Boston Bruins season was the 41st season for the franchise. The Bruins finished 6th in the league and missed the playoffs for the sixth consecutive season.

GM Lynn Patrick made a number of moves in the off-season in the continuing attempt to improve team scoring. Doug Mohns was traded to the Chicago Black Hawks for Ab McDonald and Reg Fleming. Jerry Toppazzini was also sent to Chicago in a package deal in which the Bruins acquired Murray Balfour. Both Mohns and Toppazzini had been Bruins for over a decade and had particularly shone during the 1958 playoffs.

Future Hockey Hall of Fame goalie Ken Dryden was picked in the third round of the 1964 NHL Amateur Draft by Boston but his rights were traded weeks later to the Montreal Canadiens for Guy Allen and Paul Reid, two players who never played in the NHL.

The Bruins were hopeful that the acquisition of Balfour and McDonald, who'd both been 20 goal scorers in Chicago, would solve the depth scoring issue that had plagued the team since the 1960-61 season. Tom Williams was back from the injury that ended his 1963-64 season. Orland Kurtenbach had success on the second line the year before and was made an assistant captain. Gary Dornhoefer was looking to build on his brief but impressive rookie season where he'd played on the top line with Murray Oliver and John Bucyk. Junior sensation Ron Schock made the team out of training camp after leading the Niagara Falls Flyers in scoring. Andy Hebenton was sold to the Portland Buckaroos.

Except for the departure of Doug Mohns, the defense remained largely unchanged from the previous season. Ted Green was the new leader of the Bruins blueline and seen as the replacement for Leo Boivin, who was in his penultimate season in Boston. Veteran Tom Johnson was a stabilizing presence while it was hoped that Bob McCord would build off his rookie season. Ed Westfall and Reg Fleming both switched between forward and defense. Eddie Johnston remained the Bruins starting netminder.

Despite the changes, the season started disastrously with no wins in October. In the majority of the games, the Bruins were outshot and they managed only 10 goals in 9 games. Ron Schock had 2 goals, while the "BOW Line" of Bucyk, Oliver and Williams had 3 goals. The first win came on November 1, 1964 and the Bruins had their best month of the season, going 5-4-2. After no goals in 15 games and complaining of fatigue, Murray Balfour was sent to the minors and died of a lung tumor in May 1965. Gary Dornhoefer was relegated after zero goals in 20 games and on November 29, 1965, Bob Leiter suffered a fractured left arm and was lost for the season. He wouldn't play another full season in the NHL for seven years. Wayne Maxner, Bill Knibbs and Wayne Rivers were recalled and all three would play their only full NHL seasons in 1964-65. Don Awrey was also recalled, played the remainder of the season and seven more for the Bruins.

The inconsistent play continued in December despite contributions from the call-ups, particularly Wayne Rivers. The BOW Line was outplayed on many nights with Bucyk and Oliver finishing the season -25 and -30 respectively. January saw brief call-ups for the first NHL games for Wayne Cashman, Joe Watson and Bill Goldsworthy as Dean Prentice and Ron Schock were lost to injury.

Goldsworthy played in the January 7, 1965 game at Boston versus the Detroit Red Wings which the Bruins were dominating 5-0 in the third period. Gordie Howe then scored two Power play goals and with five minutes remaining, caught Billy Knibbs, who'd scored the game's first goal, with his head down. Knibbs' head struck the ice and he appeared to be badly injured. Howe was given a major penalty and on his way to the dressing room, was doused with beer by the enraged fans. Police insisted on escorting Howe to his hotel to ensure his safety. Knibbs recovered and played the next game.

Ulf Sterner, the first European trained player to play in the NHL, made his debut for the New York Rangers versus the Bruins on January 27, 1965. [1] In Toronto on January 30, 1965, Ed Johnston was too ill to play so Jack Norris was called up. However, Norris' goalie equipment was stolen from the hotel, forcing Johnston to play. The Bruins not only lost 6-1 but Johnston's hand was broken in the game, causing him to miss the remainder of the season. Norris played the next game wearing Johnston's equipment and went a respectable 10-11-2 with one shutout. Unusually, he wore jersey #17.

During the third period of the February 4, 1965 game versus Detroit Red Wings, Bill Gadsby swung his stick at Reg Fleming after Fleming hit him with the puck. The two engaged in a stick-swinging duel, but neither was seriously injured. Both were given match penalties and Boston fans threw punches at several Red Wings players over the glass. Late in the game, Gordie Howe cut Don Awrey with a high stick. When the game finished, fans poured beer on Detroit trainer Ross Wilson which led to a scuffle in the walkway by the Red Wings bench. Bob McCord was sent to the minors, never to play for the Bruins again, and Bob Woytowich was called up for the next game and played the remainder of the season. He finished with 12 points in 21 games and would become a Bruins regular the next season. Jeannot Gilbert was called up next, resulting in 7 rookies playing in the Bruins line-up.

The February 21, 1965 game versus Chicago saw a bench clearing brawl in which former Bruin Doug Mohns fought Orland Kurtenbach. Bad blood carried over to the next time the teams met on February 28, 1965. Tom Johnson's leg was cut by a skate, ending his career. Wayne Maxner was given two misconducts and though Chicago had eight power plays, the Bruins rallied for a 5-4 victory. Johnson would remain in the Bruins organization for 30 years, coach the team to the 1972 Stanley Cup and retire as a vice president.

The Bruins were out of the playoffs entering March but made a run at finishing out of last place. On March 25, 1965, the Bruins lost 10-3 to Detroit with Ted Lindsay scoring the last goal of his career against Jack Norris. Despite winning 5 games in the month and having more wins that the Rangers, the Bruins still finished in the cellar with 48 points (the same as the previous season) as New York had more ties and four more points.

The 1964 NHL Entry Draft involved picking 16-year-olds. None of the players picked ever played for the Bruins. Future Hockey Hall of Fame goalie Ken Dryden was picked in the third round by Boston but his rights were traded weeks later to the Montreal Canadiens for Guy Allen and Paul Reid, two players who never played in the NHL.

After being sent to the minors, Murray Balfour died of a lung tumor in May 1965.

Ted Lindsay scores the last goal of his career on Jack Norris, March 18, 1965. 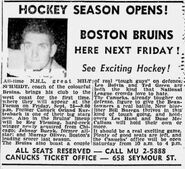 Retrieved from "https://icehockey.fandom.com/wiki/1964–65_Boston_Bruins_season?oldid=731734"
Community content is available under CC-BY-SA unless otherwise noted.