This was one of the most lopsided and poorly-attended Memorial Cup finals ever. The Oil Kings were never even competitive in any of the four games. These Marlboros were one of the most powerful junior teams ever but they were never really challenged.

Attendance at the 16,000+ capacity Maple Leaf Gardens was:

Harold Ballard refused to allow an Edmonton radio station to broadcast the games back home unless the Canadian Amateur Hockey Association (CAHA) agreed to schedule the whole series at the Gardens.

Maple Leaf Gardens was previously booked from May 11 to May 16th. The CAHA committed to play the sixth and seventh games, if necessary, at Kitchener and London. Ballard wanted them played at the Gardens and even offered to pay the Oil Kings' expenses if they had to wait those five days to play the last games.

Fortunately the series was over in four games.

Other problems affecting attendance were the late start (May 3), the many distractions in a large city as opposed to playing in a smaller city, warm weather, and the lopsided scores. The Toronto Maple Leafs had also just won the Stanley Cup. 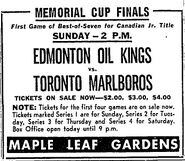 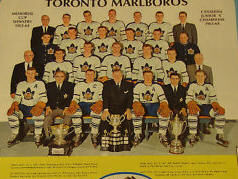