The Montreal NDG-Ottawa series was changed to best of 3, with Montreal NDG having won the first game (see above).

Note: This was the only playoff game Toronto would lose this season in 17 games played (they also tied against the Montreal Junior Canadiens).

The coach of the Monarchs was a very young Scotty Bowman. 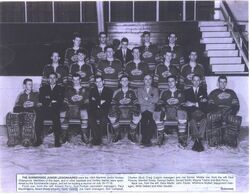 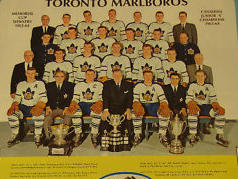 Champion Toronto Marlboros
Add a photo to this gallery

Retrieved from "https://icehockey.fandom.com/wiki/1963-64_Eastern_Canada_Memorial_Cup_Playoffs?oldid=614443"
Community content is available under CC-BY-SA unless otherwise noted.