Ice Hockey Wiki
Register
Don't have an account?
Sign In
Advertisement
in: Montreal Canadiens seasons, 1963 in hockey, 1964 in hockey

The 1963–64 Montreal Canadiens season was the club's 55th season of play. The Canadiens finished 1st in the league and lost in the Semi-finals to the Toronto Maple Leafs 4 games to 3.

The Canadiens were coming off what was for them a very poor season. The team finished third in the 1962-63 NHL season and lost the Semi-finals in a very poorly played 5 games to the Toronto Maple Leafs.

Lou Fontinato suffered a career-ending injury in that year and veterans Tom Johnson and Dickie Moore also missed a lot of time due to injuries. Goaltender Jacques Plante played his worst season in a Canadiens' uniform.

Moore retired, Johnson went to the Boston Bruins while Phil Goyette, Don Marshall, and Plante were traded to the New York Rangers. To replace them, the Canadiens obtained Gump Worsley and Dave Balon from the Rangers and got the tough enforcer John Ferguson from the Cleveland Barons of the American Hockey League. Rookies Jacques Laperriere and Terry Harper reinforced the defence. With the exception of Worsley, all the new players played beyond expectations.

Worlsey was injured in the eighth game of the season. To replace him the Canadiens brought up Charlie Hodge from the Quebec Aces. Hodge had been the team's second-string goalie for years behind Jacques Plante. Given the chance, Hodge blossomed into a fine first-string goalie and won the Vezina Trophy.

The Detroit Red Wings blanked the Montreal Canadiens 3-0 on November 10th. While the Wings were a man short, Gordie Howe scored on Charlie Hodge for his 545th career goal, breaking Maurice Richard's record. Yet another record was tied by Terry Sawchuk when he recorded his 94th career NHL shutout, tying him with George Hainsworth as the all-time NHL shutout leader.

Jean Béliveau came off of a so-so 1962-63 season to finish third in the league scoring race and win the Hart Memorial Trophy. Laperriere won the Calder Memorial Trophy ahead of teammates Ferguson and Harper. Bobby Rousseau scored five goals in one game against the Detroit Red Wings as part of a fine 25 goal season.

The Leafs, strengthened by superstar Andy Bathgate upset the Canadiens in the Semi-finals, but a dynasty was born. The Canadiens would win four of the next five Stanley Cups, narrowly missing winning the 1967 Stanley Cup Finals.

The Canadiens had working arrangements with the following teams:

The following team was a wholly-owned farm team: 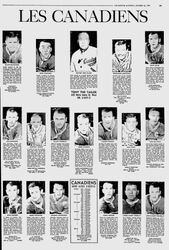 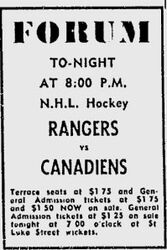 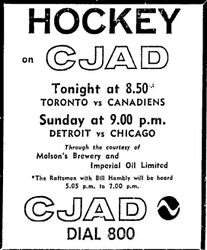 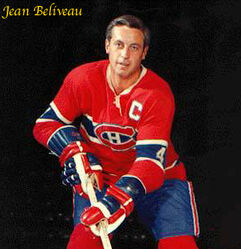 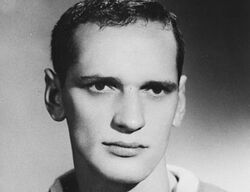 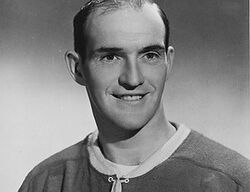