The Trail Smoke Eaters represented Canada at the 1963 World Championship.

1963 Smoke Eaters -- Had Their Problems By Jack "Buck" Kavanaugh

The Trail Smoke Eaters won the Allan Cup in 1962, and in doing so had the distinct honour of representing Canada at the World Hockey Championship, which was being played in Stockholm, Sweden, in March of 1963.

The Smoke Eaters didn't enjoy the same luck they did in 1961 at Switzerland, when they won the World Championship, and had to settle for a fourth place finish. Coach Bobby Kromm had to go along without many of his 1961 stars, when Cal Hockley, Darryl Sly, Claude Cyr and Michel Legace passed up the overseas trip. To strengthen his Allan Cup squad Kromm sought the services of Gary Collins, a 27-year old ex-pro, and Ted Maki, a 23-year old kid from South Porcupine, Ontario, who had played for the Galt Terriers in 1960-61, the year the Terriers won the Allan Cup. Despite his young age, Maki played in two European tournaments. Reno Zanier, a Trail native, returned to his home town from Fort Wayne, to act as back-up goalie to Seth Martin, and saw limited service in Europe.

After a disastrous exhibition tour across Canada, Bobby Kromm sent an S.O.S. message to the CAHA for more reinforcements, and in late February Bobby McKnight, the playing-coach of the Galt Terriers, and Bob Forhan, a slick forward from the Kitchener-Waterloo Tigers, joined the Smoke Eaters in time to participate in the World Championship finals.

Poor Showing Across Canada Due to lack of early season competition, the Smoke Eaters found the going rough in their exhibition series across Canada--in fact, they lost their last six games.

On January 29, 1963, nearly 4,000 fans gathered in the Memorial (Cominco) Arena to say goodbye to their Smoke Eaters. Bobby Kromm's boys made it a good farewell by trouncing the Spokane Comets, then a pro WHL team, 4-1.

It was on to Powell River, where the Smokies posted an easy 10-2 victory over the Regals, an intermediate "A" team. Walt Peacosh was Trail's big gun in their win, with three goals and four assists. Next stop was Vancouver, where the Smokies took on the Canucks, a WHL pro squad, and lost a 7-2 verdict, with Ron Hutchinson scoring twice for Vancouver.

It was on to Saskatoon, where the Smokies sneaked by the Quakers 8-7 in a free-wheeling game before over 5,000 fans. Hal Jones paced the Smokies with a pair of goals and five assists.The roof then fell in on the Smoke Eaters, and they dropped six in a row.

The Winnipeg Maroons started the losing string by lacing the Smokies 5-2 before 7,100 fans. The Kitchener-Waterloo Tigers beat the Smokies 6-4, with Bob Forhan, who later would join the Trail team, scoring four goals for the Tigers. Ted Maki, who was sent to the Smokies from the Tigers just two weeks previous, potted two goals for the Smokies. The Chatham Maroons sneaked by the Smoke Eaters 4-2 with the Maroons' final goal scored in an empty net.

Windsor's Bulldogs defeated Trail 3-2 before nearly 3,000 fans, and it was by far the Smoke Eaters best showing--but only to have goalie Wayne Rutledge come up with a sparkling performance for the Bulldogs. The Toronto University All-Stars played outstanding hockey and stopped the Smoke Eaters 3-1, in a game that saw coach Bobby Kromm blow his top. Kromm said he was quite concerned about his team's showing and asked the CAHA for help.

In their last showing on February 12, before going to Europe, the Smoke Eaters lost 4-3 to the Halifax Tartans. The Smokies flew back to Montreal to catch their plane for Europe, and Kromm then said he needed four more players to bring back the World Championship.

European Exhibitions The Smokies landed at Geneva, Switzerland, where they were held to a 5-5 tie, by a pick-up team of Canadian players playing in Europe. Trail moved over to Czechoslovakia for a five game exhibition series with the Czechs, and managed to come out on top, winning three of the five games. Trail had little trouble in beating the USA National team in a warm-up game at Goteborg, Sweden, turning the Americans back 6-1.

In their final exhibition game in Sweden on March 5th, Trail trounced the then World Champion Swedish Nationals 5-2, in one of the roughest games ever played in Sweden. Bobby Kromm has hit over the head by a piece of ice thrown by a fan, and suffered a badly gashed head, and had to be carried to the dressing room by the police. The Canadian players, apparently thinking Kromm was being arrested, rushed off the ice to help him. A free-for-all, involving both teams, broke out in the second period, and it took over half an hour to restore peace. Over 17,000 saw the game, with Canada serving 21 minutes in penalties, and the Swedes only two minors, despite the big brawl.

The Smokies, in their two final games before the big tournament, defeated the Finnish Nationals 8-2 in Tampere, Finland; and again 7-2 at Helsinki before 15,000 fans.

World Championship Trail won their opening game 6-0 over West Germany, with Seth Martin turning in a sparkling performance. Addy Tambellini paced the Smoke Eaters to an easy 11-5 triumph over East Germany by registering the hat trick. Trail's third straight win was at the expense of the Americans, with the score 10-4. The Americans jumped into an early 2-0 lead, but soon faded.

Trail and the Czechs locked horns in a real thriller that had 16,000 fans sitting on the edge of their seats. The Czechs tied the game late in the final period, with the Smokies playing one man short. Canada had little trouble in their fifth game, lacing Finland 12-2, with Bob Forhan banging in four goals.

The Stockholm Arena was sold out and the hockey fever was at its peak when Canada and Sweden met head-on, with the Swedes coming out on top 4-1. Sweden took a 1-0 first period lead, with Canada deadlocking the score at 1-1 after the second frame. Sweden moved ahead early in the final period and added two more insurance markers, when Canada threw defensive hockey aside, and sent five men on the attack looking for the equalizer--but only to have it backfire wth the Swedes walking right in on Martin. The victory took the steam out of the Trail team, for in no way now could they win the Championship.

The final game of the tournament meant little to Canada, but it meant everything to the Swedes. Russia and Sweden were deadlocked with 6-1 records, with Sweden beating the Soviets 2-1, but only to lose to the Czechs 3-2 on the final day.

The Soviets had to beat Canada by two goals or more in the final contest of the tournament, in order to defeat Sweden--and they did just that by edging Trail 4-2. The Reds had two men in the penalty box during the final minute of the game, when Jackie McLeod, home free with only four seconds to go, hit the goal post--and with that over 17,000 Swedish fans fainted. 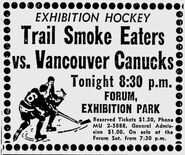 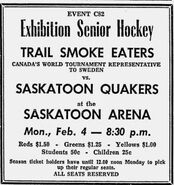 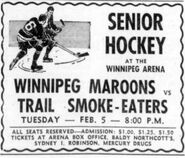 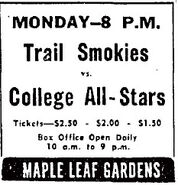 Retrieved from "https://icehockey.fandom.com/wiki/1962-63_Trail_Smoke_Eaters?oldid=438403"
Community content is available under CC-BY-SA unless otherwise noted.