This is the Saskatchewan Junior Hockey League for the 1962-63 season.

The Manitoba - Saskatchewan classic was held in Regina on January 21, with SJHL winning 5-2. The SJHL scored the first two goals of the game, held period leads of 2-1 and 4-1. SJHL leading goal scorer Wayne Caufield lead the way with a pair, Joe Watson, Garry Peters, and Granger Evans added singles. Scoring leader Bob Stoyko, and Bobby Brown scored for the MJHL.

Note: The March 15th game was stopped in the third period because of violence. This game was completed on March 18th after the first game was played,

Estevan Bruins
Add a photo to this gallery 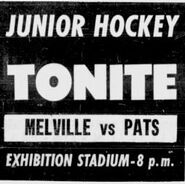 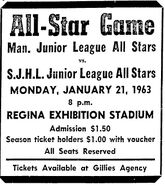 All-Star game @ Regina
Add a photo to this gallery

Retrieved from "https://icehockey.fandom.com/wiki/1962-63_SJHL_Season?oldid=442700"
Community content is available under CC-BY-SA unless otherwise noted.