This is the 1962-63 season of the Eastern Professional Hockey League. It was the league's fourth and last season.

The Kitchener-Waterloo Beavers folded. The parent New York Rangers moved the team to Baltimore to become the Baltimore Clippers of the American Hockey League,

The Sault Ste. Marie Thunderbirds were moved to Syracuse where they were not successful. The team was then moved by the parent Chicago Blackhawks to St. Louis.

The league folded at the end of the season and then was moved to the central United States and became the Central Professional Hockey League.

Played an interlocking schedule with the International Hockey League.

The last game played in the EPHL was on April 17, 1963. The Kingston Frontenacs beat the Sudbury Wolves 6-3 to win the best-of-seven final series four games to one. Attendance was almost 4000.

Sudbury's Gord Labossiere scored the league's final goal while Norm Armstrong of the Wolves got the last penalty.

Bruce Gamble was the goalie for the Frontenacs and Gerry Cheevers was in nets for the Wolves. 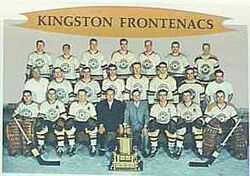 Kingston Frontenacs
Add a photo to this gallery

Pre-season @ Ottawa. Chicago won 2-1.
Add a photo to this gallery

Retrieved from "https://icehockey.fandom.com/wiki/1962-63_EPHL_Season?oldid=444186"
Community content is available under CC-BY-SA unless otherwise noted.