The 1962–63 New York Rangers season was the 37th season for the team in the National Hockey League (NHL). The Rangers finished 5th in the league and did not qualify for the playoffs.

Lou Fontinato's career came to a tragic end March 9th when he tried to check Vic Hadfield and instead was thrown headlong into the boards by the Ranger player. Fontinato lay motionless on the ice for some time before being carried off the ice on a stretcher and taken to Montreal General Hospital where the diagnosis was a fractured neck, a crushed cervical vertebra. He gradually recovered from his paralyzed condition, but would never play hockey again. Jacques Laperriere replaced Fontinato on the Canadiens defence. 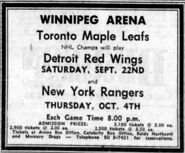 Pre-season @ Winnipeg
Add a photo to this gallery

Retrieved from "https://icehockey.fandom.com/wiki/1962%E2%80%9363_New_York_Rangers_season?oldid=696986"
Community content is available under CC-BY-SA unless otherwise noted.