Start a Wiki
The 1962–63 Montreal Canadiens season was the 54th season in franchise history. The team placed third in the regular season to qualify for the playoffs. The Canadiens were eliminated in semi-finals by the Toronto Maple Leafs 4 games to 1. 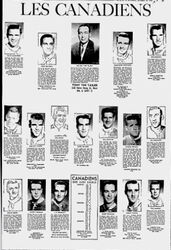 The team in October
Add a photo to this gallery

Retrieved from "https://icehockey.fandom.com/wiki/1962%E2%80%9363_Montreal_Canadiens_season?oldid=458851"
Community content is available under CC-BY-SA unless otherwise noted.