Ice Hockey Wiki
Register
Don't have an account?
Sign In
Advertisement
in: 1961 in hockey, 1962 in hockey, Boston Bruins seasons

The 1961–62 Boston Bruins season was the Bruins' 38th season in the NHL. The Bruins finished 6th in the league and did not qualify for the playoffs.

The Bruins hired fiery Phil Watson as their new coach and signed him to a three year contract. Ironically, Watson had been a nemesis of the Bruins in his playing days with the Rangers, in particular during the 1939 Semi-finals. He'd coached the Rangers to several surprise playoff berths but was notorious for being overbearing, which quickly wore thin with his players.

Willie O'Ree was traded to the Montreal Canadiens on May 10, 1961 but would never play in the NHL again.

The Bruins 1961-62 season was arguably the worst in their history. The plight of the defense began in the 1958-59 season with the trade of Allan Stanley for Jim Morrison and then the subsequent trade of Morrison. All-Star Fern Flaman became the playing coach of the Providence Reds and never played in the NHL again. Bob Armstrong played in October but was loaned to the Montreal Canadiens and never played in the NHL again. While the Bruins still had two excellent defensemen in Leo Boivin and Doug Mohns, there were no adequate replacements in the organization for the losses experienced. Both were over-taxed as evidenced by Boivin's -46 and Mohns'-62 plus/minus for the season. The Bruins had rushed Dallas Smith into full-time service the previous season. He played 8 games in October, was loaned to Montreal and spent six years in the minors before making the Bruins. Autry Erickson was lost in the 1961 intra-league draft.

As in the 1960-61 season, the Bruins had no choice but to press young, untested defenseman into action. Ted Green and Ed Westfall, both 22 years old, made the team out of camp and would become an important parts of Boston's resurgence later in the decade. Future All-Star Pat Stapleton played his rookie season for the Bruins but had a -58 plus/minus.

In goal, Don Head played his only NHL season spelled off by Ed Chadwick and Bruce Gamble. Head was Canada's netminder for their silver medal win at the 1960 Olympics. All would have goals against averages of more than four per game. Gamble would be relegated to the minors, to return with the Toronto Maple Leafs four years later while Chadwick's four games with the Bruins would be his last in the NHL.

The Bruins offense was no better than the previous season. The "Uke Line" was broken up in the 1960-61 season with the trade of Vic Stasiuk and, Bronco Horvath was lost in the 1961 intra-league draft. Fleming Mackell had retired the year before and Leo Labine had been traded. The acquisition of Murray Oliver in 1961 was a major coup and he was paired with John Bucyk. Don McKenney and Jerry Toppazzini were also paired together but a suitable winger for both lines was a continual problem. Terry Gray and Wayne Connelly both played significant time but were disappointments while André Pronovost produced 15 goals, mainly when playing with McKenney. Depth scoring was sorely lacking. The third and fourth lines were led by Charlie Burns, who had 11 goals, while Dick Meissner had 3 goals in 66 games and was a -42. Cliff Pennington played his only full NHL season, had 41 points and was runner-up for the Calder Memorial Trophy.

The Bruins opening night line-up had 5 players in their first NHL game including Don Head, Pat Stapleton, Terry Gray and Tom Williams while Ted Green, Cliff Pennington and Orland Kurtenbach had 15 games NHL experience between them. Lined-up against the experienced New York Rangers, they were soundly beaten 6-2 despite out-shooting the Rangers. After going winless in their first six games, Ed Chadwick was recalled from the minors to replace Don Head. After being shellacked for 15 goals in two games, Chadwick was sent back down. Kurtenbach was also sent to the minors, for the remainder of the season, after recording no points. Wayne Connelly was purchased from Montreal and Ed Westfall was recalled from the minors. Both would stick with the team for the remainder of the season. Head went back in net and the Bruins recorded their first win of the season, 4-0 over Detroit on October 26, 1961 in which Head had a fight with former Bruin Vic Stasiuk in the first period.

Don Head did everything he could to spark the Bruins. During the 5-2 win over Montreal on November 2, 1961, Head had another scrap, this time with Marcel Bonin. During the 4-3 win over Toronto on November 12, 1961, a delayed penalty was called on the Maple Leafs. Instead of going to the bench, Head raced to the Leafs blue line and played as an extra defenseman. This led to the league instituting a rule forbidding goalies to skate past the center red line. Terry Gray had two goals and a fight with Lou Fontinato during the 3-2 win over Montreal on November 16. The changes produced the best run of the season, 4-2-2.

However, the Bruins were outshot in most of the games during the streak. With the 4-2 loss to Detroit on November 19, 1961, where the Red Wings poured 41 shots on Don Head, the Bruins won only once in their next 15 games. Chadwick was recalled for the December 13, 1961 game versus the Chicago Black Hawks. He performed well in a 2-2 tie but after the Bruins were blanked 5-0 the next night in Detroit, Chadwick was sent back to the minors and never played in the NHL again. Don Head was back in net for the next game in Montreal, an 8-4 loss where the Canadiens rained 52 shots on net. Despite being outshot 42-28, the Bruins beat the Maple Leafs on December 23, 1961 in Toronto with Murray Oliver recording the only Hat trick of the Bruins season and adding an assist.

Don Head played his last NHL game on January 14, 1962 in a 4-1 loss to Montreal. Bruce Gamble was recalled and played the remaining 28 games of the season. After winning three of the next four games, the Bruins went on a 20 game winless streak that lasted for the entire month of February and into mid-March.

One of the few bright spots near the end of the season was Tom Williams. After playing the season opener, Williams was sent to the minors and recalled for the January 21, 1962 game versus Toronto. In the next game against Chicago on January 27, Williams scored his first NHL goal, smacking in a Don McKenney pass while unmarked in front of the Black Hawks net. Williams added another goal for good measure on a 2 on 1 with McKenney, deking Glenn Hall and slipping the puck between his legs. He played the remainder of the season and had 12 points in 26 games. He'd make the Bruins full-time the next season and be an offensive threat until traded before the 1969-70 season.

Demoralized, Boston played uninspired hockey that lacked aggressiveness. For example, during the 5-2 loss on March 10, 1962 to Montreal, the Canadiens dominated the play. The Bruins couldn't sustain any pressure in Montreal's zone, hitting was noticeably absent and turnovers abounded. Jean Béliveau scored early in the third period when he stripped Doug Mohns of the puck at the Bruins blueline and then fired a shot over Gamble's glove. Both Bruins goals came off rushes with Pat Stapleton scoring his first career goal on a solo effort in which he deked both Lou Fontinato and Jacques Plante. The Bruins finished in last place for the second straight season and had their worst campaign since their debut in 1924-25. 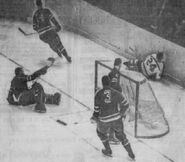