The 1960–61 Boston Bruins season was the Bruins' 37th season in the NHL. The Bruins finished 6th in the league and did not qualify for the playoffs.

General Manager Lynn Patrick made no moves in the off-season that would have any positive impact on Bruins, save one, as Ted Green was obtained in the intra-league draft. Green would play only one game in 1960-61 but become a regular on defense. A tough, hard-hitting player, Green was part of the Bruins' resurgence later in the decade.

The Bruins lost star forward Fleming Mackell, who retired from the NHL to become the playing coach of the Quebec Aces.

The 14th National Hockey League All-Star Game was held at Montreal on October 1, 1960. A team of all-stars that included three Bruins, Bronco Horvath, Vic Stasiuk and Don McKenney played against the Stanley Cup champion Montreal Canadiens. The All-Stars won 2-1 with no Bruins recording a point.

The Bruins had their worst season since their first year in the NHL in 1924-25. There was no suitable replacement for Mackell, weakening Boston's top line. The injury of Bronco Horvath, who missed 23 games, saw the production of the "Uke Line" drop significantly with Vic Stasiuk having his worse season in five years and John Bucyk finishing a team worst -31 plus/minus. The depth forwards were not of the quality as in past years resulting in a steep decline in offense. The Bruins finished last in league scoring for first time since 1955-56 and only the second time in their history to this point.

The plight of the Bruins defense began in the 1958-59 season with the trade of Allan Stanley for Jim Morrison and then the subsequent trade of Morrison. Stalwarts Fern Flaman and Bob Armstrong were fading and both played their last season. While Leo Boivin and Doug Mohns were both excellent defensemen, the Bruins relied on 22 year old Autry Erickson (who played his last full NHL season until suiting up for the 1967-68 Oakland Seals) and 19 year old Dallas Smith. Too much was expected of both Erickson and Smith with the latter being relegated to the minors for five years to develop. He'd return in the 1966-67 season, become the defense partner of Bobby Orr, win the Stanley Cup twice and play ten more excellent seasons with the Bruins.

The Bruins started the season with an eight game winless streak. The third line of Orval Tessier, Billy Carter and Dick Meissner went scoreless and in many of the games, late goals by the opposition resulted in losses or ties. During the October 16, 1960 game versus the Chicago Black Hawks, Don Simmons was hit in the face on a shot by Eric Nesterenko with less than a minute to play in the game. In order to finish the game, Jerry Toppazzini played goal using only the goalie gloves and stick. Toppazzini didn't face any shots and was the last regular position player to tend goal.[1]

During the October 23, 1960 game versus Chicago at Boston, a fan threw a light bulb at goalie Glenn Hall. It hit Hall in the face, which allowed Don McKenney to tie the score 2-2 with 1:45 left to play. Several angry Black Hawks, including Ed Litzenberger, climbed into the stands and went after abusive fans that picked fights with the players. Litzenberger scored both Chicago goals as the game ended in a tie. During the October 29, 1960 game versus the Montreal Canadiens, Milt Schmidt became the first coach to pull the goalie for an extra attacker on a delayed penalty. However, the Bruins didn't score on the play and came up short in the game, losing 3-2.

By the end of October, Carter and Meissner were sent to the minors for the rest of the season. Gerry Ouellette was called up and Jim Bartlett was activated. Ouelette would be in and out of the line-up in his only NHL season. Initially, Bartlett impressed while playing with Charlie Burns and Jerry Toppazzini, scoring twice and adding an assist on October 30 during the 5-3 win over Montreal. He played the rest of the year and scored 15 goals in his last NHL season. Ted Green was called up for his first NHL game on November 10, 1960 versus the Detroit Red Wings. However, the changes made little difference as the slide continued with the Bruins going 2-9-2 in November.

For the November 19, 1960 game against Detroit, two changes were made. In goal, the days of Don Simmons as a starting goaltender had passed. Struggling behind a weakened defense, Simmons was sent to the minors and 22 year old Bruce Gamble was recalled and played the rest of the season in the Bruins net. Willie O'Ree was also recalled for his second and final stint in the NHL. He wore jersey #25 and the changes sparked the Bruins, as they won 6-4 with Don McKenney scoring a Hat trick. O'Ree played the next four games but went pointless and was pulled from the line-up as the Bruins went winless in the remaining games in November. With only 1 goal in 23 games, Jean-Guy Gendron was traded to Montreal for André Pronovost. Pronovost would respond with 22 points while playing the remainder of the season in Boston.

On December 18, 1960, O'Ree was inserted back into the line-up for the game against Montreal. He'd be a regular for the remainder of the season and record his first points in the next game on December 22, 1960 against Chicago. He assisted on the first goal of the game by André Pronovost and then 37 seconds later, assisted on a goal by Autry Erickson. The Bruins won 4-2 in the only multiple point game of O'Ree's NHL career.

The Bruins had a 7-20-5 record entering the January 1, 1961 game against Montreal at the Boston Garden. O'Ree had switched to jersey #22 (which he'd wear for the remainder of the season) and entering the third period, the Bruins were leading 2-1. Just past the halfway mark, Leo Boivin sent O'Ree on a breakaway against Canadiens netminder Charlie Hodge. O'Ree fired a low shot to Hodge's glove side which proved to be the game winner as the Bruins triumphed 3-2. O'Ree also scored the winner on January 19, 1961 versus Detroit in a 4-2 victory. January proved to be Boston's best month of the campaign as they went 4-8-2.

On January 23, 1961, GM Lynn Patrick triggered a significant deal, sending Vic Stasiuk and Leo Labine to Detroit for Murray Oliver, Tom McCarthy and Gary Aldcorn. While breaking up the "Uke Line", Oliver would become a fabulous playmaker and finish in the top two of team scoring four times over the next six seasons. Stasiuk and Labine would be out of the NHL within two years.

The February 4, 1961 game versus the New York Rangers in Boston was delayed for over two hours due to a snow storm. John Bucyk had a car crash while driving Jerry Toppazzini to the game and four Rangers never made it to the game. The match finally started at 10 p.m. and despite playing with only 13 skaters, the Rangers won 2-1. The Bruins had a single victory in February, 1961.

Boston fared little better in March as the defense was depleted due to injuries to Leo Boivin and Fern Flaman. Bucyk continued to be a bright spot as he had a Hat trick in the 4-2 win over Detroit on March 2, 1961. Willie O'Ree scored in each of the last two games of the season, while playing with Charlie Burns and Tom McCarthy, and finished his last NHL season with 4 goals and 14 points. The Bruins finished in last place for only the second time in franchise history when the Montreal Maroons topped them in both team's inaugural season in 1924-25, 36 years before.

The Bruins did not qualify for the post season.

The Bruins did not receive any awards this season. 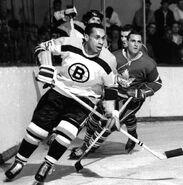 Willie O'Ree's first goal, January 1, 1961 against Montreal's Charlie Hodge was the winner as the Bruins edged the Habs 3-2.

Retrieved from "https://icehockey.fandom.com/wiki/1960%E2%80%9361_Boston_Bruins_season?oldid=688432"
Community content is available under CC-BY-SA unless otherwise noted.