The 1959–60 Montreal Canadiens season was the club's 51st season of play. The Canadiens finished 1st in the league and defeated the Toronto Maple Leafs 4 games to 0 in the 1960 Stanley Cup Finals to win the Stanley Cup for the 12th time in team history and fifth year in a row.

The use of the goalie mask was Plante's most enduring contribution to the game, however, occurred as a result of an incident on November 1, 1959. He was hit in the face by a shot from New York Rangers player Andy Bathgate, needing to go to the dressing room for stitches. When he returned, he was wearing the crude home-made goalie mask that he'd been using in practices. His coach, Toe Blake, was livid, but he had no other goalie to call upon, and Plante refused to return to the goal unless he kept the mask. Blake agreed on the condition that Plante discard the mask when the cut healed. Only Camille Henry beat him in that game, which the Canadiens won 3–1. In the ensuing days Plante refused to discard the mask, and as the Canadiens continued to win, Blake became less obstinate. The unbeaten streak stretched to 18 games. Plante didn't wear the mask, at Blake's request, against Detroit on March 8, 1960. The Canadiens lost 3–0, and the mask returned for good the next night. Plante subsequently designed his own mask and masks for other goalies. Although Plante was not the first NHL goalie known to wear a facemask (Montreal Maroons goaltender Clint Benedict had done so thirty years before), Plante introduced the mask as everyday equipment, which continues to this day.

The Canadiens placed first in the standings and met the Chicago Black Hawks in the first round of the playoffs. The Canadiens would sweep the Hawks 4–0 to move on to the finals against Toronto.

For more details on this topic, see 1960 Stanley Cup Finals.
Montreal swept the Maple Leafs, outscoring them 15–5, en route to being the first team since the 1951–52 Detroit Red Wings to go without a loss in the playoffs.

After the series Rocket Richard retired. He went out with style, finishing with his 34th finals goal in game three.

The Canadiens in October

The Canadiens in April 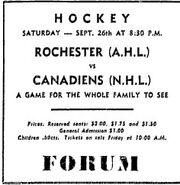 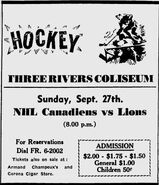 Colour highlights and interviews from the 1960 Stanley Cup Finals.