The teams met the previous year in the 1957 Stanley Cup Finals where the Canadiens defeated the Bruins 4 games to 1. Fleming Mackell had a record 14 assists during the 1958 playoffs while Maurice Richard scored 11 goals. The 1958 Finals was closer with Montreal winning Game 5 in overtime and prevailing 4 games to 2.

Game 1 at the Montreal Forum saw a penalty filled first period with 13 infractions called. Boston killed off two early penalties and then nearly scored as a Leo Boivin shot trickled past Jacques Plante and was cleared off the goal line by Claude Provost. After a fight between Boivin and Henri Richard, Boston was given a too many men penalty. Bernie Geoffrion scored on the Power play with a slap shot on a rebound despite Beliveau being in the crease behind Simmons and interfering with him. In the second period, with Jean Béliveau off for tripping, the Bruins tied it up when a screen shot by Allan Stanley sailed past Plante. The parade to the box continued as Leo Labine took the game's 18th penalty at 12:45. A scramble in front of the Bruins net saw Maurice Richard shoot the puck wide. The puck bounced off the boards and Don Simmons came out of the net and missed freezing it. Beliveau slid the puck to Dickie Moore who backhanded it into the open net for a 2-1 Habs lead. The third period saw only two penalties called but the Bruins couldn't sink one as Montreal fired 44 shots on Don Simmons and took Game 1 by a 2-1 score.


Game 2 at Montreal was again penalty filled with 17 called. The Bruins Norm Johnson opened the scoring just 20 seconds in as he fired a shot over Plante's glove on a behind the net pass from Leo Labine. Three minutes later, Bernie Geoffrion's slap shot beat Simmons low to the stick side on the power play to tie the game. Montreal then took two penalties and Plante's clearing attempt went to Larry Regan at the point who passed it to Mackell in the right corner. His pass in front of the net was deflected in by Don McKenney for a 2-1 lead. Late in the period, the Habs again took two penalties and the Bruins capitalized on the 5-3 power play. A pass from Doug Mohns to Bronco Horvath to the right of the net saw him slide the puck past Plante for a 3-1 lead (for some reason, Carl "Buddy" Boone was given the assist). Five minutes into the second period, Larry Regan stickhandled around Claude Provost and Phil Goyette and fired a screen shot past Plante for a 4-1 lead. Two minutes later, Doug Harvey scored on a solo rush to make it 4-2. The Canadiens pressed in the third period but Simmons stopped several good chances, including a Geoffrion breakaway. Horvath scored on a Stasiuk rebound with three minutes left and the series was tied with a 5-2 Bruins win.

Game 3 at the Boston Garden was much cleaner than the first two games with only seven penalties called. Maurice Richard opened the scoring late in the first period with a low shot that beat Simmons on the stick side. After a scoreless second period, Simmons let in a weak goal. With Henri Richard driving down the right wing, Simmons expected him to pass the puck but he floated it into the top left corner. At 15:06, Maurice drove another low shot to the stick side and Montreal took a 2-1 lead in the series with a 3-0 win.

Game 4 at Boston saw the Bruins play their best defensive game of the series as the Canadiens managed only 24 shots. With Dollard St. Laurent off for holding, Don McKenney took the puck from Fleming Mackell in the slot and backhanded the game's opening goal at 5:35. In the second period, a shot by Stasiuk with deflected in by McKenney for his 8th goal of the playoffs. St. Laurent suffered a broken cheekbone on a hit by Leo Labine and was out for the series. In the third period, Mackell was in the left corner and passed to Toppazzini in the slot who fired a low shot past Plante for a 3-0 lead. A backhand pass across the slot from John Beliveau found Claude Provost open at the left of the net and he fired home Montreal's only goal. Late in the period, Toppazzini tipped McKenney's pass into the top right corner but the puck bounced out so quickly that it wasn't counted. The Bruins evened the series with a 3-1 win.

Game 5 at Montreal was a goaltender's duel as Simmons faced 47 shots while Plante had 40. With Beliveau in the box, Fleming Mackell swatted in a rebound on an Allan Stanley shot to make it 1-0 Boston at 18:43 of the first period. At 2:20 of the second period, Beliveau won a face-off by flipping the puck to the slot where Geoffrion shot it in. Less than a minute later, Geoffrion backhanded a pass into the slot where Beliveau fired it in for a 2-1 Canadiens lead. At 10:35 of the third period, Bronco Horvath raced down the right wing and beat Plante to the stick side to send the game into overtime. Maurice Richard scored the winner as he weaved into the Bruins zone and fired a shot over Simmons' glove for a 3-2 victory.

Game 6 at Boston saw Beliveau win a puck battle at the left boards and pass to Geoffrion whose one-timer beat Simmons stick side for a 1-0 lead 46 seconds into the game. A little over a minute later, Maurice Richard beat Simmons low to the stick side to make it 2-0. At 18:35, Doug Mohns broke into the Habs zone, dropped a pass to Don McKenney who beat Plante five-hole to narrow the lead to 2-1. At 6:42 of the second period, Simmons let in a weak goal as Beliveau beat him with a long, low shot to the glove side. Late in the period, Boivin's giveaway to Geoffrion resulted in a partial breakaway and his backhand shot beat Simmons to the glove side. In the third period, Boston clawed their way back. Rookie Norm Johnson potted a rebound off a Larry Regan shot and then Regan's pass from behind the net went in off Plante. The Bruins pulled Simmons but Doug Harvey stopped Doug Mohns at the Habs blueline and potted an empty netter for a 5-3 win and Montreal's tenth Stanley Cup.

Jacques Plante deflects the puck past Jerry Toppazzini as Don Marshall and Don McKenney look on during Game 2 of the 1958 Stanley Cup Finals, April 10, 1958. 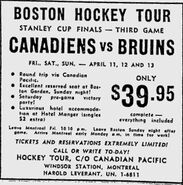 Nearly nine minutes of highlights of the 1958 Stanley Cup Finals showing all goals and the on-ice presentation of the Cup.