The 1958–59 Montreal Canadiens season was the club's 50th season of play. The Canadiens finished 1st in the league and defeated the Toronto Maple Leafs 4 games to 1 in the 1959 Stanley Cup Finals to win the Stanley Cup for the eleventh time in team history and fourth year in a row.

For more details on this topic, see 1959 Stanley Cup Finals.
Rocket Richard, hampered by injuries, did not score at all during the playoffs. Toronto was making its first Finals appearance since 1951.

Don McKenney shoots past Canadiens Tom Johnson during the Bruins 4-2 win on October 12, 1958. McKenney is wearing the new gold pants introduced in 1958. 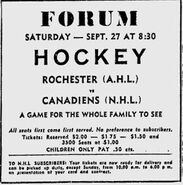