They were a farm team of the Montreal Canadiens of the National Hockey League.

Ths junior team was still without a league to play in. Instead, it played for the Laurier Cup against the teams of the Ontario Hockey Association's (OHA) Junior A League. The Canadiens won this trophy. The games also counted for the OHA teams in their standings.

The team also played games against the teams of the Eastern Ontario Senior League. These games also counted in the standings. The Canadiens signed some senior players for these games, which gave them a chance to rest their junior players.

The home games in the junior series were all played in Ottawa. The senior home games, and some exhibitions against Quebec Hockey League teams, were played in a brand-new arena in the city of Hull, Quebec. Hull was just across the river from Ottawa (it is now a part of the city of Gatineau).

The Moscow Selects were the first Soviet team to tour Canada. The Canadiens lost 7-3 to them on December 1st at Montreal. In the rematch, the Canadiens were reinforced by players from the Toronto Marlboros but still lost 10-1.

Ottawa-Hull Canadiens
Add a photo to this gallery 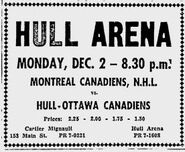 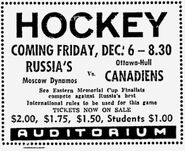 Toronto
Add a photo to this gallery
Retrieved from "https://icehockey.fandom.com/wiki/1957-58_Ottawa-Hull_Canadiens_season?oldid=464661"
Community content is available under CC-BY-SA unless otherwise noted.