Ice Hockey Wiki
Register
Don't have an account?
Sign In
Advertisement
in: Ontario Hockey Association Junior A, 1958 in hockey

This is the 1957-58 season of the Ontario Hockey Association's Junior "A" series:

Note: The Ottawa-Hull Canadiens's games only counted for their opponents. They were an independent team. They also competed for the 1957-58 Laurier Cup. 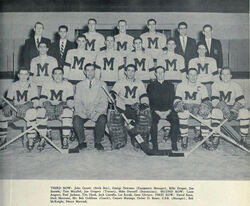