Ice Hockey Wiki
Register
Don't have an account?
Sign In
Advertisement
in: National Hockey League seasons, 1957 in hockey, 1958 in hockey

The 1957-58 NHL season was the 41st season of the National Hockey League. Six teams each played 70 games. The Montreal Canadiens were the Stanley Cup champions, defeating the Boston Bruins four games to two in the best-of-seven final series.

It was announced in September that Senator Hartland Molson had purchased 60% stock from the Canadian Arena Company and the Montreal Canadiens from Senator Donat Raymond.

Doug Harvey and Ted Lindsay tried to get a players association going, and sued the NHL over the issue of player pensions. Lindsay was traded to Chicago because of his efforts.

After the NHL declined to negotiate with the players over benefits and would not open the books on the pension plan, the player's association filed an anti-trust lawsuit. The lawsuit alleged the monopolization of the professional hockey industry since 1926. At this time, the Toronto Maple Leafs players voted unanimuously to certify the union.

The NHL started to fight back. First, they traded Lindsay to Chicago to separate him from the Red Wings, who the NHLPA targeted for a union vote. Next, Jack Adams spread false stories in the press alleging various slanders had been made by Lindsay against the Red Wings players, and produced a fake contract to the press showing an over-inflated salary value for Lindsay, greater than Gordie Howe. The ruse worked and the Red Wings players voted to dis-associate themselves from the organizing.[1]

Despite this, the anti-trust lawsuit placed the NHLPA in a strong position. In an out-of-court settlement on February 5, 1958, the NHL promised:[2]

The "Uke Line" debuted in the Bruins first game of the season on October 12, 1957 versus the Chicago Black Hawks. They produced immediately with Vic Stasiuk scoring, assisted by John Bucyk and Bronco Horvath in a 3-1 win. Along with the line of Don McKenney, Fleming Mackell and Jerry Toppazzini, the Bruins had two high scoring lines. Horvath, McKenney and Mackell all finished in top 10 of league scoring while all six members of the two lines had 20 or more goals with Horvath potting 30. The Bruins trailed only the Canadiens in goal scoring.

Glenn Hall, after two playoff years in which the Wings were eliminated, was traded along with Ted Lindsay to the sad-sack Chicago Black Hawks and Terry Sawchuk was brought back to Detroit in a very bad deal that saw Larry Hillman and Johnny Bucyk go to Boston. Chicago almost made the playoffs, and Hall's great goaltending, including 7 shutouts, one of which was in his debut with the Hawks, made him a contender for the Hart Memorial Trophy.

On October 19th, 1957, Rocket Richard scored on Glenn Hall and became the first player to score 500 career goals during a 3-1 win over Chicago. He immediately dedicated it to his old coach Dick Irvin. Irvin had died on May 15, 1957 after a long bout with bone cancer.

When Marcel Paille was brought up to the Rangers from Providence of the AHL for the ailing Gump Worsley, he sparkled, and Worsley was sent down to Providence. Then Paille went sour and the Gumper was recalled. Worsley got hot and the Rangers started winning. Worsley had his finest campaign up to this point with a 2.32 goals-against average and 4 shutouts and the Rangers finished second — their highest finish since 1941-42.

Two contenders for the Calder Memorial Trophy, Chicago's Bobby Hull and the Toronto Maple Leafs' Frank Mahovlich, battled all season for rookie honours. Mahovlich prevailed and won the trophy, although the Maple Leafs finished last in the NHL.

This season also saw the first black man play in the league. Willie O'Ree suited up for the Boston Bruins on January 18, 1958 in a game against the Canadiens in Montreal. He played again the next night before being sent down to the minors. O'Ree would return for the 1960-61 season and play 43 more games for the Bruins.

During the second period of the March 13 game at home versus Montreal, Habs Doug Harvey knocked Vic Stasiuk into goalie Jacques Plante. Plante's head hit the crossbar, resulting in a gash and a concussion. Harvey was given a misconduct and Plante couldn't continue playing. With no backup goalie, Boston's practice goalie, John Aiken, was called in to play his only NHL game. The score was 1-0 Bruins but Aiken wasn't up to the task as the Bruins pumped 4 goals past him in less than five minutes to make it 5-0. Montreal scored once before John Bucyk potted his 20th of the season making it 6-1 Boston. Aiken had a better third period and only let in one but the game ended in a 7-3 Bruins win.

The Bruins and Rangers last met in the 1940 Semi-finals where New York prevailed 4 games to 2 on their way to winning in the 1940 Stanley Cup Finals. Due to the circus performing at Madison Square Garden, after Game 2, the remaining games were played in Boston. The line of Fleming Mackell (4 goals, 14 points), Jerry Toppazzini (8 goals, 10 points) and Don McKenney (5 goals, 12 points) powered the Bruins to a 4 games to 2 triumph.

Game 1 at Madison Square Garden saw Harry Lumley play his only game of the 1958 playoffs in goal for the Bruins. After Fleming Mackell put Boston up 1-0 in the first minute of the game, the Rangers Larry Popein tied it up at 4:40. Jerry Toppazzini countered three minutes later but then the Rangers special teams took over the game. With Jean-Guy Gendron in the box for charging, Andy Hebenton scored a Shorthanded goal to tie it 2-2. Later in the period, Vic Stasiuk was sent off for hooking and Camille Henry scored on the Power play for a 3-2 Rangers lead at the end of the first. Former Bruins Dave Creighton scored another power goal in the second period, countered by Bronco Horvath. Creighton scored again in the third as Gump Worsley earned the 5-3 Rangers win.

Game 2 at New York had Don Simmons in net for the Bruins. In the first period, Doug Mohns scored on a point shot but Andy Bathgate responded with 2 goals. Don McKenney tied it up late in the period on a solo rush. Cutting to the left of a Ranger defenseman, he shot against the grain and beat Worsley to the top right corner. The Rangers Jean-Guy Gendron scored the only goal of the second period. The Bruins pressed in the third period. At 11:13, Mackell took the puck into the Rangers right corner and passed to Mohns at the left point. He quickly passed to McKenney who was to the left of the net. McKenney slid a backhand shot through Worsley's legs to send the game into overtime. Fleming Mackell sent Jerry Toppazzini in for the winner which he celebrated with a Bronx salute. Mackell's 3 assists led the Bruins to a 4-3 victory.


Game 3 at Boston Garden was dominated by the Bruins. They pumped 36 shots on Gump Worsley and the Rangers took nine penalties. In the first period, the Bruins scored 3 power play goals, one by Doug Mohns and two by Don McKenney to take a 3-0 lead. In the second period, playing with John Bucyk and Vic Stasiuk, Carl "Buddy" Boone added an even strength goal. Norm Johnson scored the first playoff goal of his career, shorthanded, in the third period. Don Simmons made 28 saves and earned the shutout as the Bruins romped to a 5-0 win.

Game 4 at Boston saw the Bruins again out shoot the Rangers, sending 41 shots on Worsley and force the Rangers into taking eight penalties. However, the Rangers would open the scoring with a shorthanded goal by Dean Prentice and then Dave Creighton would add a power play goal for a 2-0 Ranger lead at the end of the first period. In the second period, Jerry Toppazzini cut the lead to 2-1 on the power play but Andy Hebenton countered at 10:17. Andy Bathgate then scored the Rangers second shorthanded goal of the game to make it 4-1. In the third period, Toppazzini scored shorthanded but another Bathgate goal saw the Rangers win 5-2 and tie the series at two games apiece.


Game 5 at Boston was a Bruins romp where Worsley was peppered with 42 shots. After first period goals by Fleming Mackell, Bronco Horvath and Don McKenney, Leo Boivin took a tripping penalty at 3:18 of the second period. Toppazzini and Mackell outworked three Rangers behind Worsley's net, resulting in a Mackell shot from the right side which Worsley kicked out. Fern Flaman slammed in the rebound for a 4-0 Bruins lead. Five minutes later, a John Bucyk pass from the left corner back to Flaman at the right point saw his shot hit the skate of Rangers Bill Gadsby and trickle in for a 5-0 lead. Two minutes later, Parker MacDonald got the Rangers on the board as he flipped a rebound over Simmons. In the third period, on a 5-3 power play, Toppazzini ripped home a shot from the point for a 6-1 Bruins win and a 3-2 series lead.

Game 6 at Boston saw Worsley face more than 40 shots for the third straight game. A power play goal by Larry Regan in the game's first minute, followed by a shorthanded goal by Toppazzini and another man advantage goal by Norm Johnson staked the Bruins to a 3-0 lead. Harry Howell responded at 14:33 but Fleming Mackell countered three minutes later putting the Bruins up 4-1. In the second period, Andy Bathgate and Doug Mohns traded goals. In the third period, a goal by Mackell and two by Toppazzini for the Hat trick saw the Bruins cruise to a 8-2 win and a series victory.

The following is a list of players of note who played their first NHL game in 1957-58 (listed with their first team, asterisk(*) marks debut in playoffs):

The following is a list of players of note that played their last game in the NHL in 1957-58 (listed with their last team): 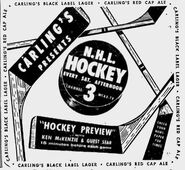 One minute clip of Marc Reaume hitting Don McKenney resulting in Reaume being knocked out, November 30, 1957.

A minute of silent highlights of Game 5 of the 1958 Semi-finals between the Boston Bruins and New York Rangers on April 3, 1958. The last four goals of the game are shown including two second period goals by the Bruins Fern Flaman, a goal by the Rangers Parker MacDonald and a third period goal by Jerry Toppazzini in the Bruins 6-1 win.