The Maritimes Armed Forces League opted for the Allan Cup competition as did the independent teams New Glasgow Rangers and Halifax Wolverines.

The Maritimes Senior League was formed in November with the Amherst Ramblers, Charlottetown Royals, Summerside Aces, and Mount Allison University (which only played part-time). The intention was that the league would finish play at the end of February after which its playoff champion would enter these playoffs.

However when the MAHA announced its policy in January Amherst and Summerside said that they wanted to play for the Allan Cup. League play then ended on February 1st and Charlottetown was left out in the cold. The Royals were allowed to play in the Maritimes playoffs in March.

After Summerside was beaten by Amherst a playoff was arranged with Charlottetown for the championship of Prince Edward Island.

New Glasgow Rangers now qualified for the 1957-58 Eastern Canada Allan Cup Playoffs. They lost the best of 5 quarter final 3-2 to the Hull Legion. The Rangers then were admitted to the semi final for the Maritimes Senior Championship (see below).

Note: Summerside Aces were allowed to play in both series. 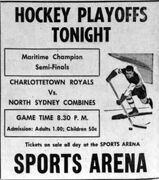 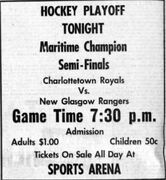 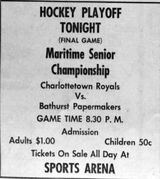