Note: There were minor pro teams in British Columbia, Alberta, Saskatchewan, and Manitoba in the Western Hockey League. This partly accounts for the lack of senior teams in western Canada.

Flyers Are Western Champions; Win by 4-2

Special to the Spokesman-Review

Spokane earned the championship and the Patton Cup that goes with it by downing Fort William's Beavers, 4-2, behind the brilliant goaltending of John Sofiak. It was the first time in senior amateur hockey history that an American team was able to win the Western Canada title. The victory advances the Flyers to the finals of Allan Cup play for the Canadian championship. Spokane will meet either Whitby or North Bay in the final series. The two Canadian teams are now playing off in the Eastern final with Whitby leading, 1-0.

Sofiak was the difference tonight as the Flyers took their fourth and deciding victory in the best-of-seven series.

Zahara Hits Winner Fort William played its best hockey of the entire series in the first two periods. But the score was two-all when the second period was over. The Beavers couldn't cope with the Flyer goalie and finally weakened in the final 20 minutes.

John Zahara, the swift rookie from Peace River, Alberta, got the winner for the Flyers with just 3:54 gone in the last period. Passes from Carl Cirullo and Doug Toole set Zahara up about 20 feet from the net and the Flyer forward caught Beaver goalie Paul Morin out of position with a shot that slid in on the short side of Morin. Tom Hodges added a "make sure" goal that virtually assured the Flyers of victory at 9:10.

Hodges "Home Free" The Beavers were pressing with everything they had at that time. Tick Beattie swiped the puck for the Flyers and whipped it to Dave Gordichuk. Gordichuk came through with his third big assist of the night when he put Hodges in for a breakaway that Morin had no chance of stopping. Sofiak's toughest moments came later in the first and second periods.

Art "the dart" Jones put the Spokes in front, 1-0, with 6:32 gone in the game on a wicked, waist-high eight footer. Then Fort William's Steve Black sneaked one past Sofiak to tie it at 8:41. The Spokane goaltender was under heavy pressure through the rest of the period with the climax coming when Jones went off at 16:38, and Larry Plante at 16:51, to leave the Flyers two men short.

Big John buckled down and a terific job of penalty skating by Beattie, Jack Lancien and Don McLeod pulled the Flyers out of the fire.

Sofiak Earns Credit for Much of Flyer Success Far back in February, the Spokane Flyers lost a play-off hockey game to the Rossland Warriors by a score of 7-4. Even though one of those seven goals went into a net which large John Sofiak vacated some moments earlier so that the Flyers might "ice" an extra skater and thus try to pull even, it was a night on which the round man was not at his best.

But ever since--in four straight wins over Rossland that followed, the four straight over Grant Warwick's Trail Smoke Eaters which came after that; the eight games of the Vernon titanic series and then the seven more against Fort William--big John has been at his best almost every night. Sofiak is a lot like the little girl who had the little curl. There have been occasions when the Flyer defence sagged, the opposition got two or three quick goals; and John promptly appeared to lose interest in the proceedings.

There have been none of those nights in Spokane's historic progress to the final round of the Allan Cup series, from which the winner will emerge with what amounts to the senior hockey championship of North America. Instead, John has been at his best--and, to get back to the little girl, when Sofiak is good, he is very, very good.

How About Forming North American Association? The powers-that-be of the Canadian Amateur Hockey Association may be greeting the Flyers' presence in this title round with mixed emotions. In fact, I'd be willing to bet that they are. After all, the Allan Cup has been a purely Canadian prize ever since it was first put up for competition back in 1908. But there should be some consolation for the CAHA in the fact that all of the Flyers, even those who have acquired or applied for United States citizenship--are Canadian by birth. Over and above that, there might be a solution to the present oddity of having a United States-based team playing for a Canadian title. That would be a consolidation of the amateur hockey operation north and south of the world's longest unguarded frontier.

West of Chicago, the Flyers are the only American team competing in senior hockey. East of Chicago there are a number of teams competing in what could be such hockey, or is comparable. There is the Eastern League, whose members include Charlotte, North Carolina, and Philadephia, both of which were anxious to play here this spring. There is the International League, with clubs (I believe) in Toledo and Indianapolis, to name just two.

If all of this hockey on the United States side of the border could be amalgamated with the CAHA's senior leagues, which stretch from the Okanagan, east to Canada's Maritimes, it would be possible to set up a North American play-off which would be just that in name and in fact.

Patrick's Prediction of "Death" Seems Odd It was odd to read, along with the account of the Flyers' clinching win at Fort William, of Lester Patrick's decision to pull out of the Western League hockey operation at Victoria, because, he claimed, "the game is dying."

Perhaps the game is dying in Victoria. But what proof is that, as far as other cities are concerned?

The sport had been virtually dead in Seattle. In the last two seasons it has come back with a far-echoing bounce. Until the Flyers moved into the Coliseum, it was in danger of expiring here. No sports operation in the entire Northwest now is more solid--and after what coach Roy McBride and his crew have accomplished this season, it's bound to keep flourishing.

Los Angeles is in the process of building an 18,000 seat indoor arena. The Califorinans figure on having hockey in there. Portland, it is said, hopes to get back into the picture as soon as its red-tape-tangled Exposition and Recreation center gets off the drawing board and on the ground. The biggest boost the game has had in years came from this last winter's televising of National League games, which proved helpful from an instructional standpoint, even for a great many Spokane fans.

Hockey dying? It seems like an odd thing for Lester Patrick to say, since he is the one man who contributed as much as anyone in giving Canada's national pastime a solid foothold in the United States.

Things Worked Out Well in the Long Haul At the risk of boring the nonhockey following readership, let's say it with a few more paragraphs.

There was considerable indignation when the Flyers were rushed out of here for Fort William on such a tight schedule, that they ahd to step out of a group of Fort William automobiles and into their hockey suits to play the first game, and then had to play another about 28 hours later.

But everything worked out well in the long haul. Bobby Kromm and Don McLeod arrived on the scene just in time to pick up the injury-caused slack. The Flyers left no doubt about their superiority in the last two games, and now have the opportunity--unusual in play-off hockey--of seeing at least two games of the series which will decide which team they play for the championship trophy.

What's more, they should have at least a week in which to get in some practice time, as well as rest their bones from the rigors of the 24 play-off games that are behind them. Twenty-four games? That's right. How many did they play at home in the regular season? Twenty-four.

It's making, what with one thing and another, for a long season. 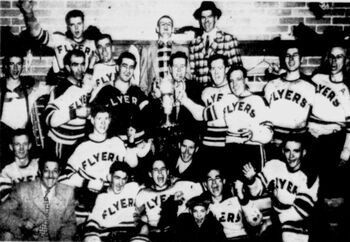 Retrieved from "https://icehockey.fandom.com/wiki/1956-57_Western_Canada_Allan_Cup_Playoffs?oldid=439619"
Community content is available under CC-BY-SA unless otherwise noted.